China leads the way as PV slips back behind wind in Europe, finds new report. 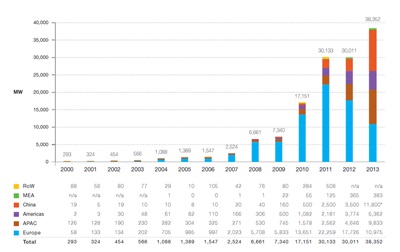 At least 38.4 GW of solar electricity was connected to the grid globally in 2013, but new policies in Europe have seen the technology slip back behind wind energy in terms of new deployments.

Those are two of the key findings in an updated report from the European Photovoltaics Industry Association (EPIA), whose annual analysis is regarded as one of the most reliable in the solar sector.

As widely predicted and already reported by others, China was the world’s leading geography in terms of new PV capacity in 2013, as total installations rose nearly 30 per cent year-on-year. The EPIA report suggests that at least 11.8 GW of solar electricity was installed in China last year, thanks to bold targets set by central government.

Next came Japan with 6.9 GW and the US with 4.8 GW. While Germany remained the leading European country for PV installations with 3.3 GW, that figure is well down on recent years following changes to financial support mechanisms in the country that have been designed to limit the cost of that support to the government.

Across Europe as a whole, just under 11 GW of PV was installed, and the UK ranked second behind Germany with 1.5 GW added. Although that was enough for PV to rank as one of the two most installed sources of electricity across Europe for the third year in a row, the decline from 22.3 GW in 2011 and 17.7 GW in 2012 meant that solar slipped back behind wind energy in terms of new installations in 2013. 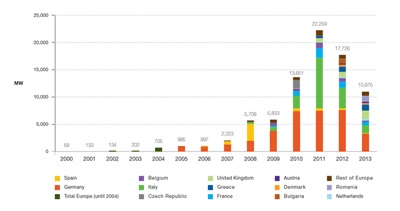 Putting Europe in perspective
However, EPIA’s president Oliver Schäfer says that the European decline must be seen in the context of both those changing policies and the wider energy business: “The forecast for Europe in the next years should be put into perspective and be considered as a stabilization towards a solid level, around 10 GW a year,” he said as the report’s findings were announced at the Intersolar trade show in Munich, Germany.

“Europe’s situation at the end of last year shows that PV, as any other energy business, remains policy-driven,” Schäfer added. “A series of retrospective measures were implemented in [recent] years in various European countries, leading to the sharp market decrease observed in 2013. Sustainable, predictable and dynamic framework conditions and policies are needed in Europe and globally to provide enough visibility to investors.”

However, Europe remains by far the largest region in terms of cumulative installed capacity, accounting for 81.5 GW of the global total of 138.9 GW.

Schäfer believes that PV is now becoming a major and mainstream part of electricity supplies all around the world, and the EPIA report highlights that the technology now accounts for 3 per cent of electricity demand in Europe – rising to 6 per cent at peak times.

“Europe’s PV development was unrivaled for a decade until 2013,” states the EPIA report. “The USA and Japan, once PV pioneers, used to be behind Europe in terms of PV penetration, yet China has reached their level with just a few years of fast development.” 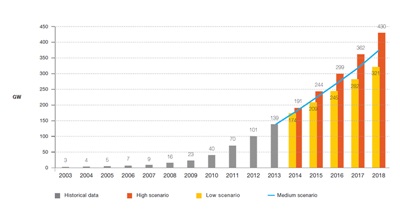 Global prospects brighter
In the rest of the world, only Australia has shown significant PV penetration, with the development of the market largely corresponding with economic development. “After taking root in OECD countries (Europe, North America, Japan, Australia), it has started to reach emerging countries,” explains the report. “While the BRIC countries score low as a bloc, China and India will lead Brazil and possibly Russia by example. Africa scores last on the development list, though projects are piling up fast.”

In its forecast for the coming years, EPIA says that the situation in Europe is uncertain, with “drastic” cuts to feed-in tariffs set to suppress many markets this year, and government support in sunny locations like Spain, Portugal and France all but evaporating amid administrative barriers. “Given these new conditions, the short-term prospects for the European markets are stable in the best case, and could even decline,” the EPIA says.

In its “most likely” scenario, new PV connections in Europe will slip back to 8-9 GW in 2014, ahead of a very modest recovery by historic standards. In its most optimistic forecast, cumulative installations in Europe could reach 156 GW by 2018, and account for perhaps 7 per cent of total demand - but that now looks highly unlikely.

“Reaching a substantially higher share would require a real paradigm shift in the way PV is supported and incentivized, even after cost-competitiveness is reached in many countries and market segments,” admits the EPIA report.

“It is clear today that [the] more ambitious scenarios are not realistic options anymore and would require tremendous market developments, currently unsupported by public policies in Europe.”

Globally, the situation looks a lot more positive, with growth set to continue in the key markets of China, Japan and the US. EPIA’s “medium” scenario predicts that global cumulative PV capacity will rise from around 140 GW today to approximately 375 GW in 2018, and perhaps as high as 430 GW.