OmniVision up sharply on solid outlook 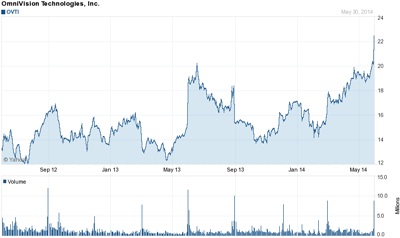 The stock price of California-based OmniVision Technologies rose more than 10 per cent after the imaging sensor company released a positive outlook for its forthcoming fiscal quarter.

At $22.48, equivalent to a market capitalization of $1.26 billion, OmniVision’s closing stock price on May 31 reached levels not seen since August 2011, after CEO Shaw Hong said that he was “please to conclude fiscal 2014 on a high note”.

The company’s latest financial year, which ended April 30, saw OmniVision post annual sales of $1.45 billion, up 3 per cent on fiscal year 2013. On the bottom line, however, the Santa Clara firm’s net income more than doubled, to $95 million.

“Our financial metrics have continued to improve, with better gross margin, higher cash balance, and lower inventories,” noted Hong. “We have made meaningful progress on multiple fronts, including the diversification of our revenues into multiple geographies, especially in Asia, and the strong growth in our emerging automotive and security markets.”

And despite a slight year-on-year fall in revenues for the closing quarter of fiscal 2014, the market reacted positively to Hong’s outlook for the coming months. The CEO is expecting sales to rise to somewhere between $360 million and $400 million in the current quarter.

“We are also working on new technologies and applications in our core and emerging markets that have the potential to substantially enhance our market position over the longer term,” said Hong.

Rear-view camera ruling
Expanding on those comments in a conference call with investors, the CEO identified two key growth drivers: the increasing globalization of the smart phone market – particularly in China – and the emergence of new applications such as three-dimensional imaging and human interfaces based on machine vision.

New applications are also emerging in the automotive sector, where car makers are deploying an increasing number of cameras in vehicles to aid drivers.

On top of that, Hong pointed out a recent final ruling by the US National Highway Traffic Safety Administration (NHTSA) that will require most new vehicles to come equipped with rear-view cameras to help prevent so-called “backover” incidents, where pedestrians are hit by vehicles in reverse.

From May 2018, states the NHTSA, all new cars, buses and trucks weighing less than 10,000 pounds must have technology expanding the field of view to a 10 foot by 20 foot zone directly behind the vehicle.

According to NHTSA figures there are an average 210 fatalities and 15,000 injuries every year caused by such incidents. Children under five years old account for 31 per cent of those fatalities, while adults 70 years of age and older account for 26 per cent. 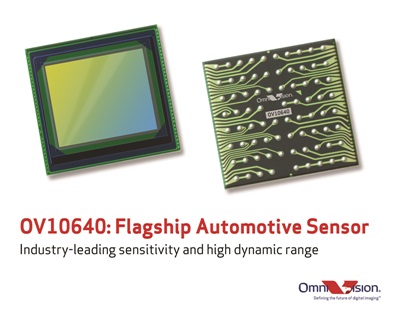 Last month, OmniVision released a new imaging sensor that it has optimized for the automotive industry, including for rear-view camera applications. Its OV10640 device is described as the first automotive image sensor built on the company's "OmniBSI" technology.

OmniVision says that this yields the industry’s highest sensitivity to capture highly detailed, full-resolution 1.3-megapixel images and video at 60 frames per second while minimizing any motion artifacts. Following qualification, it is expected to go into volume production towards the end of calendar 2014.