Gooch & Housego buoyed by profit growth ahead of US rationalization

Interim results show 34% rise in pre-tax profit and a sharp increase in R&D spending, but firm will shut two US sites.

Optical component and system maker Gooch & Housego has reported a 19 per cent rise in sales in its latest financial results – thanks to both a series of recent acquisitions and organic growth.

Revenues of £34.4 million for the six months that ended March 31 represented a new record for the UK-headquartered company, up from £29 million a year ago.

Even excluding the impact of acquisitions like that of Spanoptic and Constelex in late 2013, sales still jumped by 7 per cent, and that was matched by a sharp improvement on the company’s bottom line.

Adjusted pre-tax profit of £5.1 million was up more than 34 per cent on the figure of £3.8 million posted a year ago – though that was thanks in large part to a “gain on bargain purchase” accounting entry related to the Spanoptic deal. The company’s share price rose by around 2.5 per cent to 665p following the financial update.

“A solid performance in our industrial laser market was supplemented by better demand from the telecommunications and semiconductor sectors,” announced the UK company in its interim statement, adding that the aerospace and defense division had also performed strongly – with sales up 37 per cent to £10.2 million - following recent difficulties caused by reduced military spending in the US.

“This growth has been driven by strong sales of sub-assemblies for defense applications and continued buoyancy in the sales of navigation components for the civil aerospace market,” said the firm. “Budgetary constraints in the US continue to create headwinds, although these are having less of an impact on established programs.” 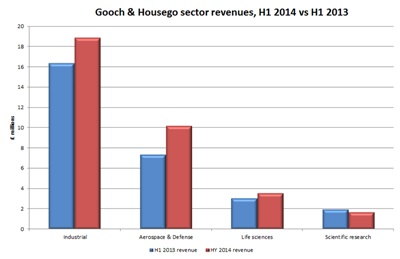 Solid industrial demand
Gooch & Housego’s recent acquisitions have had a more direct impact on sales to the life sciences market, driving a 15 per cent rise in revenues to £3.6 million. The only sector where the company reported lower sales was scientific research, where revenues of £1.7 million now represent only 5 per cent of Gooch & Housego’s turnover.

Alongside the higher sales and profit, spending on research and development also rose by nearly one-fifth, although a rationalization of manufacturing and research locations will now see two of the company’s US sites closed (see more below). As of March 31, the firm employed 644 people, up from 581 in September and largely a result of the recent acquisitions.

The industrial sector remains Gooch & Housego’s largest by sales, accounting for 55 per cent of company turnover in the latest results. Describing business in the industrial laser sector as “solid”, the firm also highlighted “excellent” sales of precision optics and acousto-optics for applications in the semiconductor market.

“The industrial laser market is continuing to evolve and grow, driven by the success of the fiber laser,” added the company. “Gooch & Housego anticipated these changes with the development of a family of products for fiber laser applications, including the Fibre-Q, with the result that the company today is benefitting from these market trends. In other applications, most notably fiber-optic sensing, the Fibre-Q is proving to be a key enabling technology that is now being deployed by a number of our key customers.”

Melbourne, FL, and New Jersey sites to close
But while demand for one of Gooch & Housego’s key products, namely acousto-optic Q-switches used by industrial lasers, is said to remain solid, the company now says that its customers no longer require such a wide variety of these components.

“In response to these changes, and as a result of the steady improvements in productivity that the company has made to the production of these products, Gooch & Housego no longer needs to maintain three separate acousto-optic manufacturing facilities,” the company revealed in its interim filing.

“The decision has, therefore, been made to close the Melbourne, Florida, operation and to transfer the business to the company’s Ilminster, UK, and Palo Alto, California, facilities.”

That closure will cost Gooch & Housego around $1.2 million in cash, but should deliver annual savings of $1 million once completed – something that is expected by the end of the current financial year in September.

Another activity that has come to an end is the company’s work on hyperspectral imaging for cancer diagnostics. Following what Gooch & Housego describes as “inconclusive discussions” with potential commercial partners earlier this year, managers have decided to close the New Jersey research facility where the research was taking place.

That will cost an additional $0.8 million, although mostly on a non-cash basis, and the company points out that it will continue to develop and manufacture hyperspectral imaging products out of its Orlando, Florida, site.