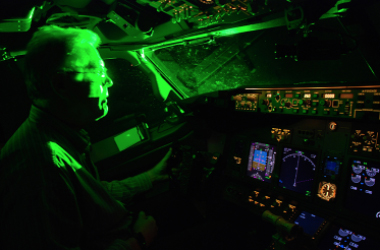 “Through our collaboration with Airbus we are working to introduce our metamaterial technology as a solution to laser interference in the aviation industry.” The announcement in early June follows the 2014 release of an FBI report citing 3,960 aircraft laser strikes in the US in 2013 according to the Federal Aviation Authority.

Airbus Senior VP Innovation Yann Barbaux said, “At Airbus, we are always on the lookout for new ideas coming from innovative SMEs, such as Lamda Guard. We are pleased to explore together the potential application of this solution to our aircraft, for the benefit of our customers.”

Over the past year Lamda Guard has been working with the research community at the University of Moncton and the University of New Brunswick, as well as stakeholders and investors to highlight the benefits of nano-composites. 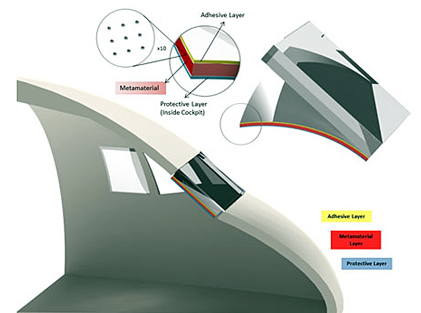 Metamaterial technology on cockpit windscreens could block light from any angle.

The Atlantic Canada Opportunities Agency (ACOA) has also played an important role in Lamda Guard’s R&D process. In 2012, ACOA assisted Lamda Guard with technology commercialization and recently upgraded its contribution to $500,000 to further assist the company in developing and manufacturing its products for the aviation industry.

The Lamda Guard-Airbus partnership marks the first time an optical metamaterial nano-composite has been applied on a large-scale surface, the partners claim.

Lamda Guard is a subsidiary of Metamaterial Technologies, with offices in Canada and the UK. It develops commercial applications of nano-structured metamaterials that utilize thin film technology for advanced optical applications in aerospace, security and defense industries.