While still not viable for mainstream production, the interest from industry is readily visible.

by Gregory Flinn
AKL staged its regular biennial platform for the ‘laser applications of tomorrow’ in early May. Organized by Fraunhofer ILT in Aachen, Germany, by far the dominant topic at the event was laser additive manufacturing (LAM). 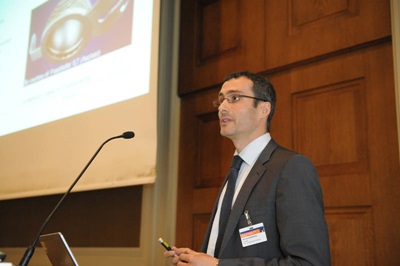 Trumpf: back in the LAM game

Additive speed
Much of the focus at AKL’14, and in particular during the TBD, was placed on LAM. For metals, LAM comprises both what is generally recognized as laser metal deposition (LMD) and direct metal laser sintering (DMLS).

Boosted by a 15x speed increase (up to 40 cm3 per hour) in the last five years and utilizing lasers of up to 4 kW, LDM is already a mainstream industry tool for repair and renovation of older metal parts, and also as a means for hardening/improving (i.e. through coating of) the surfaces of otherwise lower quality (conventional) new parts.

In contrast, DMLS has needed a decade to see a similar speed increase (up to 10 cm3 per hour), and it is still very much a rapid prototyping tool for fields such as automotive development, commercial marine applications and others. But that might change in the near future – while commercial DMLS systems are generally equipped with 200 or 400 W fiber lasers, Fraunhofer ILT is already experimenting with 2 kW systems.

Real-world applications for DMLS are already found in aerospace, where the exceptionally high cost of conventional parts and the typically very long lead times mean that even current DMLS approaches are already competitive.

Other examples can be found in medical technology, where the need for one-off, custom implants, often at short notice, means that it is sometimes the only viable approach.

Fuel nozzles for more efficient jet engines
The beauty of DMLS is that the cost of manufacture is determined solely by the amount of material needed – extra complexity involves no additional cost; lighter-weight parts are actually cheaper and manufactured more quickly. 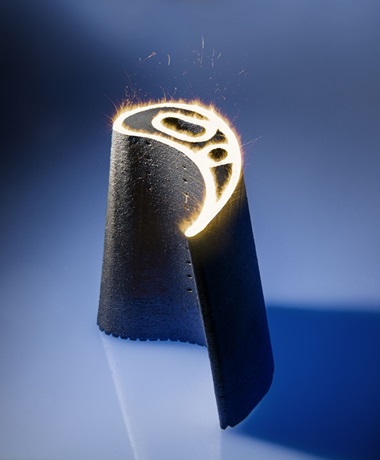 For many potential applications the latter is a double bonus, as lighter components in aircraft and cars translate into better fuel consumption. Even gradient materials are possible, further expanding the possibilities.

While additive manufacturing approaches are still some way from toppling conventional subtractive manufacturing techniques, presentations made by leading technology developers including Airbus, GE, EOS, BMW and Poly-Shape did give a taste of both current and forthcoming real-world applications.

For example, although the few additive manufactured parts already deployed in commercial engines are all of the non-critical type, GE now claims to be close to volume production of a vital component – the 19 fuel nozzles required for each of the new high-efficiency LEAP turbofans under development with joint-venture partner Snecma, a subsidiary of Safran.

At 80 per cent of the ‘subtractive’ component weight, and with five times the durability, the component has already been qualified for use. According to William T. Carter from GE Global Research in Niskayuna, US, “at the point when process optimization ceases and the process becomes ‘frozen’, starting 2016 we will require somewhere between 50 and 100 systems for manufacture of around 100,000 nozzles”.

Mike Shellabear, head of product and project management at the additive systems developer EOS in Krailling, Germany, highlighted the trend towards adoption of additive manufacturing in both medicine and non-commercial aerospace applications, such as for unmanned aerial vehicles (UAVs).

Additive manufacturing is now also a popular tool in motor sport and in automotive development, as highlighted by EOS and underlined in a subsequent presentation by Maximilian Meixlsperger from BMW’s Rapid Technologies Center.

Further comments from these and other presenters at the AKL event related to the system format, cost and material requirements likely needed before any serious introduction into mainstream manufacturing can take place. 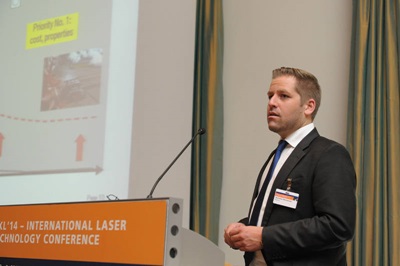 "Digital photonic production"
Some of the biggest challenges confronting LAM are materials compatibility and powder issues such as grain size and uniformity, voids and impurities, as well as their cost, component and inter-system repeatability, surface finish and component durability - as well as in situ process monitoring and off-line inspection.

Given that DMLS can create components that it is simply not possible to machine in the conventional way, some inspection tasks require entirely new test and measurement approaches.

The reasons – at least in part – for the dominance of LAM at AKL’14 were barely disguised, or indeed actively promoted. That is, along with (subtractive) laser machining, laser milling, laser structuring, laser polishing and others, laser additive manufacturing forms one of the cornerstones of the ILT’s own development program.

ILT intends to bring all of these technologies together with the creation of an internationally recognized centre for what it calls “Digital Photonic Production” (DPP). Funding to the tune of €55 million has already been secured from Germany’s Federal Ministry of Education and Research (BMBF), and a new €12 million dedicated campus at RWTH Aachen University will provide 200 new jobs, with construction scheduled to begin this year.

Trumpf returns to LAM
Antonio Candel-Ruiz of Trumpf Laser- and Systemtechnik introduced his talk with the news that the company was making a return to DMLS. Historically, Trumpf was one of the pioneers in the field – thanks to an earlier collaboration with ILT. But following the rather disappointing market introduction of its ‘TrumaForm’ SLM system, Trumpf decided to exit the fledgling market in 2003.

The latest move was no surprise to Reinhart Poprawe, CEO at ILT and at the new DPP center. “I told my colleagues at Trumpf a year ago that they needed to return, so I very much welcome the move announced today,” he said. “It will enhance competitiveness in the market and will also promote access to the potential customer base.”

Even Shellabear from competitor EOS was positive about Trumpf's return, saying: “Naturally we have to be cautious of the consequences when a well-infrastructured organization such as Trumpf enters the market, but at the same time, we welcome the addition of a name such as Trumpf to the segment.”

And it appears that Trumpf’s return to DMLS comes not a moment too soon. LAM, and in particular DMLS, or even ILT’s DPP (by definition, any combination of additive and/or subtractive manufacturing), all look well poised to take an increasing share of a rapidly growing sector within high-tech manufacturing.

The Wohler Report – regarded as the source for the industry - indicates market growth for 3D printing (of all types) over the last 25 years at more than 25 per cent while other, more recent reports put the market value at $5.4 billion by 2018, and up to $12 billion in 2025, with indications that the approach will enable entirely new business models in the manufacturing sector.

Gregory Flinn is an independent photonics professional and freelance journalist, with a focus on European strategy, policy and markets.