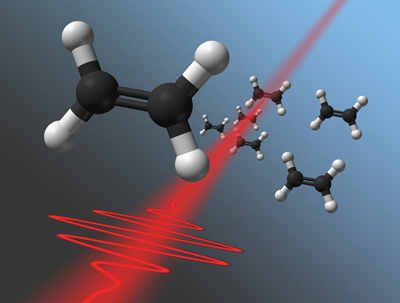 An Austrian-German collaboration has developed an optical method to precisely control certain chemical reactions with ultra-short bursts of energy. By directing femtosecond laser pulses at some organic molecules, the scientists can determine output products in different ways from conventional chemical reactions.

The laser pulses achieve this by changing the distribution of electrons in the molecule; electrons have a relatively tiny mass compared with atomic nuclei and are therefore significantly influenced by the laser pulse, whereas the much heavier nuclei are hardly affected.

The theoretical research partner is the Institut für Physikalische Chemie der Friedrich-Schiller-Universität Jena, Germany, while the group that achieved the practical results is based at the Technical University of Vienna, Austria. The experimental results have recently been published in two scientific publications: Physical Review Letters and Physical Review X.

Prof. Stefanie Gräfe  of Friedrich-Schiller-Universität Jena, told optics.org, “A major purpose of this research was to demonstrate how with simple tools molecules can be selectively dissociated. No complicated waveforms or specially-shaped laser pulses are necessary. It is a simple setup that gives us a picture of the processes occurring. We orient the molecules with the first laser pulse and then modify the relative angle at which the second laser hits the molecule to obtain selectivity in the dissociation process.

“This is really fundamental research. So far, it is lacking several features that could enable commercial use. First, in comparison to standard chemistry, the amount of precise products one can currently obtain is much lower. In our approach, products are generated in the interaction region of the laser focus and the molecular gas jet whereas in a chemical lab, liters of products can be obtained. Secondly, we use intense lasers, thus we typically ionize our samples. This is in most cases not desirable.” 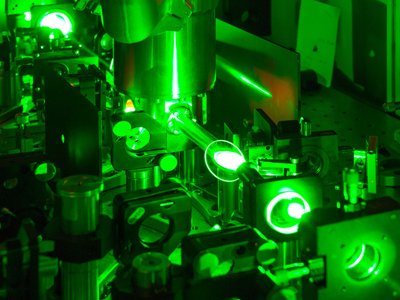 In the production part of the collaboration, researchers at the Photonics Institute at Vienna University of Technology have succeeded in directly inducing the selective splitting of hydrocarbons such as ethylene or acetlyene into smaller fragments.

Researcher Markus Kitzler commented, “We are using two different laser pulses. The first pulse lasts about 50fs and makes the molecules rotate at different speeds. After some time, all of the molecules in a sample are approximately aligned. Then the second laser pulse is applied, which only lasts for 5fs, or less than two oscillations of the light wave. It is this pulse that changes the state of the electrons; it can even remove electrons from the molecule.”

Electrons weigh much less than atomic nuclei. Therefore the electrons can be influenced dramatically by the second laser pulse, while the heavier nuclei are too inert for any observable motion in this short period of time. If exactly the right electrons are removed from the molecule, the molecule can be made to break at a specific position. Thus, acetylene (C2H2) can be broken into CH2+, CH+, or carbon ions, C+. Kitzler added, “Various reaction paths are possible. For the first time, we have managed to distinguish these paths and select the reaction we want.”