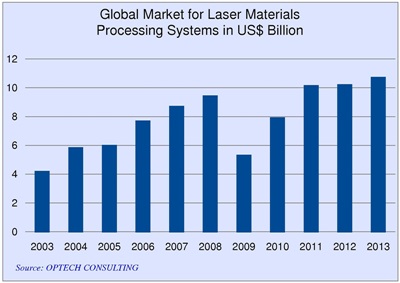 Industrial lasers: back on a growth curve (click to enlarge)

The annual survey published by Mayer’s company Optech Consulting suggests that returning demand in the key European markets of France, Germany and Italy was a key reason for the bounce – although the annual rate of growth in 2013 was below the market‘s long-term average of 10 per cent, as well as the very strong rates of growth recorded in 2010 and 2011.

When viewed in the context of a market for machine tools that in fact contracted by 9 per cent last year, the growth figures for laser systems look more impressive.

However, the overall picture hides a significantly different picture in "macro" and "micro" materials processing applications. Mayer reports that the market for laser systems used in macro applications like cutting, welding and marking grew up 7 per cent to reach $8.2 billion.

On the other hand, sales of systems for micro processing declined very slightly on the 2012 figure to $2.5 billion, largely a result of the continued weak demand in semiconductor capital equipment spending.

For semiconductor microlithography applications, Mayer explains that his figures include the value of the light source rather than the entire tool.

Geographic variations
Mayer blames the relatively weak growth of the laser systems market in 2013 on lower demand in the key Asia-Pacific region in the second half of the year. Shipments to China, Japan and Korea represent just over half of the total market for laser materials processing systems.

Demand in Europe, which now amounts to a global share of about 30 per cent, increased by more than 10 per cent in US dollar terms (although this was partly due to a strengthening euro).

"The figures signal a remarkable turnaround from the previous year when Europe was the [worst-]performing laser systems market with a decrease of 8% on a US dollar basis," notes Mayer.

Demand in the Americas region, which amounts to about 15 per cent of the global volume, was also up in 2013 – thanks to emerging economies. "While the US market cooled in 2013 after three years of strong growth, Latin America contributed a double-digit increase," Mayer says.

Although the analyst does not break out this particular report in terms of different laser types, Mayer did tell optics.org that fiber lasers accounted for some 23 per cent of the $3.3 billion market for laser sources used in materials processing applications last year – up from a share of 18 per cent in 2012.

A future Optech report will include more details on the impact that this change is having on the market for carbon dioxide lasers. Mayer also pointed out that a successful roll-out of extreme ultraviolet (EUV) lithography equipment in the coming years could increase the annual market for carbon dioxide lasers by "several hundred million" US dollars later in the decade.