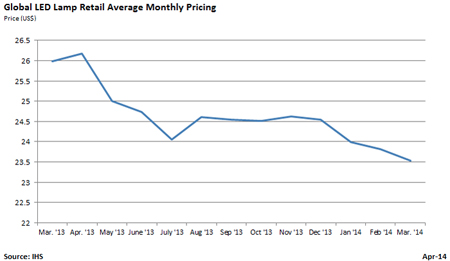 Today, the global average LED lamp retail price is $23.50 per unit, indicating a fall of 1.2 percent in March 2014 over February 2014 and a 9.4 percent drop from the same time last year. The figures come from the latest release of IHS Technology’s LED Lamp Retail Price Tracker, which also reports that during the past 12 months the lumens per dollar ratio of LED lamps has increased by 17.5 percent to 30.2 lumens per dollar.

In an interview with optics.org Jamie Fox, principal analyst at IHS, explained the reasons why he expects the LED price slide to continue for the foreseeable future: “Chinese manufacturers are increasingly taking market share from other countries’ suppliers. Also LED technology is still improving, and there is generally fierce price competition between the manufacturers.”

So even if there is widespread legislation requiring certain countries to reduce or remove relatively inefficient incandescent sources from the market, the vale of LED sales will continue to fall. Fox added, “There are still certain countries where incandescents are readily available and there is competition with CFLs and other light sources to consider.”

Fox believes that LED price falls are actually still needed to encourage and enable early adoption of the technology because he thinks that prices are still too high for consumers. Asked if he saw any prospect of a longer term price upturn for LEDs and associated systems, he was blunt: “No, prices will continue to fall.”

“The big question is whether manufacturers will reduce the lifetime of the products so that they have more replacement market. Manufacturers have been working hard to reduce prices over the years to enable real adoption. Smart technologies where lighting is on/off/dimmed under certain conditions, or controllable, offer potential for savings, but typically these will come off the ongoing electricity cost rather than the up-front capex purchase cost of the product.”

Cree boasts ‘the biggest thing since the light bulb’

LED maker Cree last month claimed that its LED Bulb, launched last year, has become “the best-selling LED bulb in America, and has enabled more than $1 billion in lifetime energy savings for consumers. 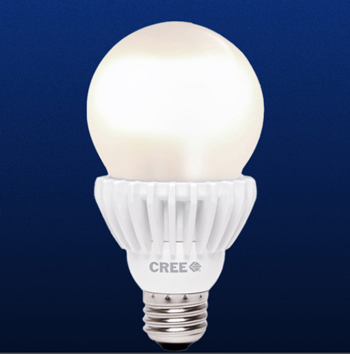 Cree and US retailer Home Depot developed what they have called a formula of delivering innovative products at a price that gives consumers more reasons to replace their energy-wasting incandescent bulbs by lowering the prices of the Cree LED Bulb product line by as much as 23 percent.

With the aim of driving further adoption and expanding its market, Cree has also introduced the first 100W replacement LED bulb, which looks and lights like a conventional light bulb. The new 100W Cree LED Bulb delivers LED light at a breakthrough price of just $19.97, which the company claims is the lowest-priced 100W LED replacement bulb.

Chuck Swoboda, Cree Chairman and CEO, commented last week, “This time last year, we reshaped a 100-year-old lighting industry with the introduction of the Cree LED Bulb. The success of this product has exceeded our expectations, but it is time to push LED lighting to the next level and give consumers even more reasons to switch to LED.”

“Today we are also addressing the last major product gap for LED bulbs – the 100W replacement. Our industry-leading innovation has delivered the first true 100-watt LED bulb with the look and performance of a traditional bulb, but at a fraction of the energy consumption.”

In another development, Cree last week announced its new 8000-lumen LMH2 LED Module designed for high-ceiling applications. The LMH2 is designed to replace 150W ceramic-metal-halide (CMH) lamps while using only 63 percent of the power and lasting three times as long.