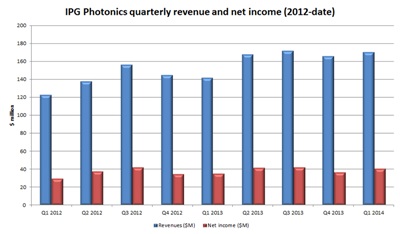 IPG Photonics has posted another sharp uptick in sales for the opening quarter of 2014, with CEO Valentin Gapontsev hailing a “remarkable” performance in what is traditionally the weakest period of the year for the fast-growing firm.

Gapontsev was referring to revenues of $170.6 million, equivalent to a 20 per cent rise compared with the opening three months of 2013. For the first time in several years, the Q1 sales figure was also higher than the $165.9 million recorded in the final quarter of the previous year.

Despite that, a 15 per cent rise in net income to $40.5 million and expectations of further growth in the current quarter, IPG’s stock price took a tumble immediately after the results were announced and ended the day nearly 6 per cent down at $64.35.

That was perhaps a reflection of profit margins that have been squeezed by competition to IPG’s pulsed fiber lasers in China (at 52.3 per cent, gross margins were down a full percentage point year-on-year). Gapontsev said that sales of these products were down 13 per cent year-on-year to $28.8 million, due to “increased competition from Chinese vendors as well as lower demand in some regions”.

However, with IPG in the process of releasing new lower-cost versions and what the CEO described as some “very significant contracts” in China, the company is optimistic that it can fight back. Similarly, sales of IPG’s quasi-CW fiber lasers are not growing quite as quickly as had been expected because of the very low price of legacy lamp-pumped Nd:YAG lasers in the market.

Power performance
But in the high-power sector, responsible for by far the largest chunk of overall sales at IPG, the company continues to see rapid growth.

At exactly $100 million, sales of high-power lasers accounted for 59 per cent of revenues in the quarter, and were up 33 per cent on the prior year. “In the quarter we installed a new record of 2.3 MW of combined optical power for more than 1,000 produced units,” noted Gapontsev, adding that the figure was up 44 per cent on the opening quarter of 2013.

He also highlighted the efforts by IPG to increase the electrical efficiency of those lasers to a point where they can even exceed the claims of rival direct-diode systems.

Launched at the SPIE Photonics West exhibition in February, the “ECO” class of ytterbium-doped fiber lasers is now said to offer an efficiency of 45 per cent. Gapontsev points out that the efficiency figure has improved from 25 per cent just five years ago. 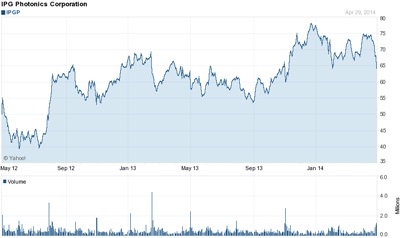 Laser diversification
IPG is also working to diversify its product offering, with recent product introductions including ultrashort-pulsed lasers aimed at applications in cataract surgery, and nanosecond-pulsed lasers with an average power of up to 5 kilowatts.

“We are finishing qualification and [ready for] mass production of these families now,” said Gapontsev. While some have already been shipping since last year, fast-growing orders means that a significant contribution to IPG’s sales should be evident in the second half of 2014.

Mass production of other new lasers, including holmium- and thulium-doped fiber sources and a 2.5 µm-emitting chromium-doped zinc selenide source launched at Photonics West, is also anticipated in the second half, although any meaningful sales will take longer to filter through.

IPG adds that it is now seeing solid demand for its fiber laser workstations, known as “seam steppers” – a product line that has been perceived by some as a potential threat to relationships with its own system-building customers.

But Gapontsev has dismissed those concerns, and told investors that a number of major automotive manufacturers were testing and using the tool for welding of steel and other metals. IPG’s systems are also finding demand from the smart phone industry, where laser cutting of sapphire and glass is becoming a key market.

Ukraine tension
The CEO also dismissed any concerns about the impact of economic sanctions imposed by the European Union and the US on Russia as a result of rising tensions in Ukraine, noting the global nature of IPG’s internal supply chain.

Although the company does have three sites in Russia, including facilities for component and systems manufacturing, IPG’s management does not anticipate any serious impact on the business from such trading sanctions, and should be able to source many of the components made in Russia from its German sites instead.

Meanwhile, the company has just bought two buildings in Massachusetts that are set to be used for expanded laser systems production, diode laser crystal growth and research.