Infrared imaging specialist FLIR Systems is readying the launch of new consumer-focused thermography products, as it looks to make the technology “affordable to everyone”.

The company’s new “FLIR ONE” thermal imager accessory is set for release by the end of June, and represents the first product based on the small, low-cost thermal imaging core FLIR calls “Lepton”.

Coupled with three new boardroom appointments focused on marketing and a restructuring of the company’s revenue-reporting business units, the strategy reflects what CEO Andy Teich described to investors as “integral to FLIR’s mission to become the world’s sixth sense”.

Reporting the company’s latest quarterly financial results, FLIR’s CFO Tony Trunzo said that total sales were up 1 per cent to $351.5 million, compared with a year ago. But the company’s restructure – including several relocations and the closure of a site in France – hit FLIR’s bottom-line performance, as net income fell by more than 40 per cent to $29.9 million.

FLIR has ditched its previous separation of sales into “commercial” and “government” segments, now aligning results around what it sees as six key market areas, namely: surveillance, instruments, OEM and emerging markets, maritime, security and detection.

Trunzo illustrated the strategic direction by highlighting FLIR’s new miniature thermal camera based on the Lepton thermal core. Revealed at a security-themed trade show in Las Vegas earlier this month, the CFO said that its $499 price would set a new benchmark in the industry.

CEO Teich said that FLIR has now received its first major order for Lepton-based products, from a customer integrating the technology within UAVs, and added: “With the launch of Lepton and the products it will enable, the opportunity to offer infrared everywhere and become the world’s sixth sense is closer than it has ever been.”

Marketeers on board
FLIR’s new consumer-oriented diversification strategy is also illustrated by a trio of new appointments in the company’s boardroom.

Within the past quarter, the Oregon-headquartered firm has added former Samsung America tablet marketing executive Travis Merrill as its new chief marketing officer, along with e-commerce specialist Cathy Halligan and consumer electronics retail expert Cathy Stauffer. FLIR is also in the process of setting up an e-commerce portal on its own web site.

That has coincided with a high-profile tie-up with Formula One team Ininiti Red Bull Racing, which will see the motor sports giant use FLIR’s miniature thermal cameras to provide critical information about their cars’ performance and reliability during testing and races – and FLIR gain the kind of global visibility that it needs to target consumers directly.

In Formula One, the introduction of engines featuring dual energy recovery systems this season is said to have presented significant cooling challenges for all teams, with careful management of car temperatures expected to be a significant factor as the season unfolds. Red Bull’s team principal Christian Horner said in a FLIR statement that the insights gained with thermal imaging could give the team “a key edge over our rivals”.

Despite the new consumer and e-commerce focus, spending by governments and their military agencies on high-end infrared imaging technology remains the dominant part of FLIR’s business at the moment – illustrated by a $50 million order from a customer in the Middle East in the latest quarter.

The US government also remains the company’s biggest single customer, accounting for just over one-fifth of FLIR’s sales in the latest results, although that proportion has steadily declined in recent years. 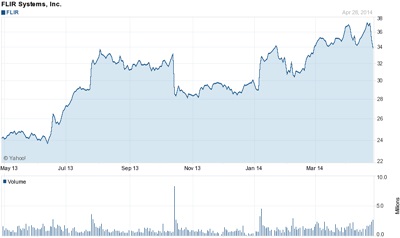 Trending up: FLIR's stock (past 12 months)

While the company enters what looks to be a period of transition, Teich and his colleagues are still expecting FLIR’s total sales during 2014 to range between $1.45 billion and $1.55 billion.

And while FLIR’s stock price fell slightly as investors digested the first-quarter update, Teich’s more consumer-focused strategy appears to be popular with the market. Since he took over as CEO in May 2013, the company’s stock has risen in value from just under $25, closing at $33.94 on April 28.