CEO Chuck Swoboda announced a 16 per cent rise in revenues over the same period in 2013, to $405.3 million, while net income rose by more than a quarter to reach $28.2 million.

Despite that, the company’s stock price took a tumble in after-hours trading, and on April 23 opened nearly 10 per cent lower than its previous close – likely reflecting a squeeze on gross margins that is expected to continue through the end of Cree’s fiscal year in June.

Despite the heavy marketing spend by the company as it tries to establish the company as more of a household name in a lighting world long dominated by Philips, GE and Osram, and the lower margins associated with selling light bulbs, Cree continues to pile up cash.

And with more than $1.2 billion in cash and other liquid assets on its balance sheet, the company is once again eyeing opportunities to grow through strategic acquisitions. Swoboda told an investor conference call:

While the CEO indicated that no such move was imminent, he expects that opportunities will begin to present themselves as LED penetration picks up across the lighting sector. “I think there is a perspective that as [adoption] accelerates, the landscape is going to change and the opportunities will start to become obvious,” he said. “We’re starting to look at more seriously [at opportunities] than we have for the last couple of years.” 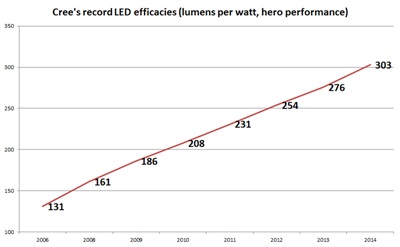 Beating 300 lumens per Watt
On the technology development side, Swoboda said that Cree had released no fewer than five new versions of its LED light bulb in little over a year, and was working hard to develop a lower-cost next generation bulb to prompt greater adoption. “We’re reinvesting most of the profits to fund additional marketing investments and generate even more awareness that the Cree LED bulb pays for itself,” he told investors.

A month ago, Cree announced another of the kind of technical breakthroughs that has characterized the company ever since it span out of a North Carolina State University laboratory in the late 1980s.

The latest achievement - a 303 lumen per watt white high-power LED – continues the firm’s series of record-breaking performance markers, and compares with a figure of 276 lumen per watt result just over a year ago. In 2006, Cree’s that record performance stood at “only” 131 lumen per watt – indicating the rapid pace of innovation in LED chips.

“Relentless innovation is a driving force at Cree as we continue the pursuit of 100-percent LED adoption,” said John Edmond, one of Cree’s co-founders and still director of advanced optoelectronics at the Durham, NC, firm. “Pushing the boundaries of LED performance is critical to enhancing LED lighting designs, and this 303 lumens-per-watt result will enable more cost-effective lighting solutions.”

In recent weeks, that push has manifested itself in price cuts across most of the Cree LED bulb product line, which Swoboda says has already helped to increase sales, confirming that what he described as “significantly more opportunity to drive LED adoption”.

The CEO also highlighted another R&D benchmark set recently by the company, with what is claimed to be the industry’s first concept LED-based luminaire with an efficacy exceeding 200 lumens per watt – a level far in excess of other lighting technologies.

In the immediate future, Cree is set to continue meeting the higher demand by expanding its manufacturing capacity – largely through an ongoing conversion from 4-inch to 6-inch wafer production at its headquarters. That conversion is said to be more than half complete, with full conversion slated for the end of 2015.