Memorandum of understanding raises possibility of thin-film solar panel maker locating research and manufacturing activity in the US. 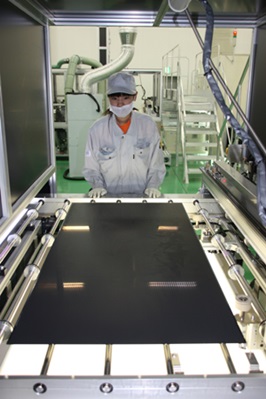 Solar Frontier, the Japanese company regarded as a leading exponent of thin-film photovoltaics technology, is considering an expansion that would see new research and manufacturing activity in the emerging high-tech region of Buffalo, New York.

The firm, which currently makes all of its copper-indium-selenide (CIS) solar modules in Miyazaki, Japan, is looking to establish production bases abroad. It has just signed a memorandum of understanding (MOU) with the State University of New York College of Nanoscale Science and Engineering (CNSE), and will conduct a technical and economic feasibility study before making a decision.

“Solar Frontier will continue to advance itself as a global leader in the solar energy segment, and establishing overseas production bases is at the core of our mid-term growth plan,” said Solar Frontier’s president Hiroto Tamai in a joint statement.

The MOU follows recent efforts by local authorities to promote New York State as a leading high-technology center, with much of that effort focused on public-private partnerships and foreign investment.

In September 2011, some of the biggest names in the semiconductor industry pledged to invest billions of dollars in the region to develop next-generation technologies, while in late 2013 the US-based LED chip manufacturer Soraa revealed plans to build a new production fab in Buffalo.

High-tech growth
With CNSE and its Albany Nanotech Complex already regarded as a world-leading R&D center for the semiconductor sector, in 2012 the industry-led US Photovoltaic Manufacturing Consortium said that it would develop a thin-film CIGS technology roadmap at the site (CIGS and CIS are largely seen as interchangeable terms, although individual companies have their own specific material recipes including gallium and sulfur).

Alain Kaloyeros, the chief executive of CNSE, said: “Governor Andrew Cuomo challenged the State of New York to become a leading high-tech knowledge economy. Our feasibility study with Solar Frontier, the holder of a proprietary CIS thin-film solar photovoltaic technology, is a step toward unveiling that vision – toward the reality of new high-tech jobs, new economic growth, and to becoming a center for advanced nanotechnologies.”

A subsidiary of the energy company Showa Shell Sekiyu - itself a part of the global oil giant Royal Dutch Shell - Solar Frontier is the world’s largest provider of CIS solar modules, by shipments and revenue.

It recently claimed a new world-record conversion efficiency of 20.9 per cent for the low-cost PV technology, although that was for a very small research-level solar cell (measuring 0.5 cm2) rather than a full-scale demonstration.

However, company CTO Satoru Kuriyagawa suggested that the approach could be transferred into mass production, saying: “Solar Frontier’s new 20.9 per cent efficiency record resulted from a CIS cell cut from a 30 cm by 30 cm substrate produced using a sputtering-selenization formation method - the same method we use in our factories."

The company ramped up production at its 900 MW capacity Kunitomi manufacturing plant in 2011, and is currently establishing a 150 MW site in Tohoku – seen as a model for future overseas manufacturing facilities - that should open for business in March 2015.