Funding boost for Gooch and Housego 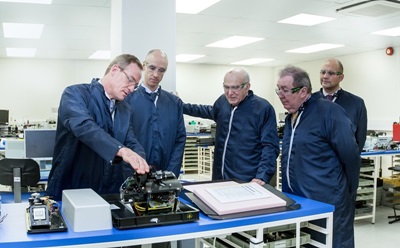 The company, which says it will use the grant from the Department for Business, Innovation and Skills (BIS) to boost investment in its new systems technology business unit in Torbay, was one of 37 companies selected for RGF support in the fifth round of the competitive fund. In total, the RGF is expected to hand out £3.2 billion to UK businesses over seven years.

“The objective is to build a multi-disciplinary team with expertise in mechanical, electronic and software design and to integrate these technologies with G&H’s expertise in photonics and fiber-optics,” announced the company.

“The systems technology group is accelerating G&H’s move up the value chain by providing a strong pipeline of component and sub-systems development, and offering customers a complete system design, development and manufacturing service.”

European leadership
Graham Catley from the firm said, “The RGF funding will mean G&H is able to further strengthen its expertise in a number of areas which are key to the strategic growth of both the company and also European leadership in this area. The resulting expansion of the R&D and production facilities at G&H (Torquay) will be a tremendous boost to both employment and the reputation of the Torbay area.”

Other technology companies to receive RGF funding in the latest round included the microwave satellite communications company Avanti Communications and radiotherapy specialist Elekta, while luxury car firm Aston Martin Lagonda was also selected from a list of 133 applicants.

In order to gain support through the RGF, businesses have to explain how much money they need and what they will use it for, before the bids are considered by an expert panel that recommends to ministers which bids to support. Ministers then select the bids that they believe will give the best value for money to the UK taxpayer.

Business minister Michael Fallon said: “The Regional Growth Fund is about backing companies and sectors that have the vision and capability to create long-term growth, but need extra support to realize this potential.

“We have fine-tuned the fund - improving its governance and getting money into the hands of businesses more quickly - and I’d strongly encourage any firms that can generate significant private sector investment and sustainable jobs to bid for a share of the next round we’re launching this summer.”

The UK’s coalition government says that the RGF, the latest round of which it believes will “unlock” some £1.9 billion additional private funding on top of the £300 million direct government injection, will help to rebalance the country’s economy by boosting manufacturing and hi-technology enterprises.