Concentration of target biological molecules in samples can be observed using laser-stimulated fluorescence. 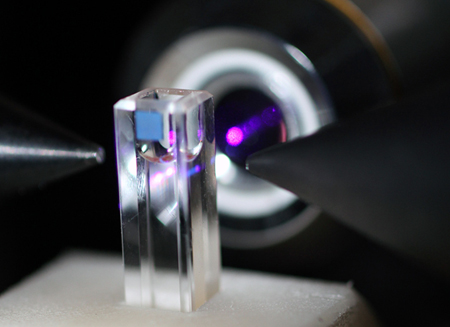 Concentration of tumor markers in a sample can easily be observed.

Because human blood is teeming with a wide range of proteins it can be difficult to identify certain tumor markers that indicate the presence of cancer. However a new method now enables effective diagnostics to be performed in a single step. Scientists will present the analysis equipment at analytica, the international trade fair, in Munich between April 1-4 (Hall A1, Booth 530).

Tumor markers in the blood help to determine whether a patient is afflicted with a malign tumor and whether it is excreting markers more vigorously – which includes highly specific proteins that can give an early indication of a serious condition for physicians. Conventionally, it has been costly in time and effort to detect such markers. To detect a single specific protein, doctors first have to separate and purify the blood in several steps, and then isolate the marker.

Now researchers working in the Project Group for Automation in Medicine and Biotechnology (PAMB) at the Fraunhofer Institute for Manufacturing Engineering and Automation (IPA) in Mannheim, Germany, have developed a one-step analysis.

“Our goal is to detect biological molecules in blood, or in other types of samples from the patient such as urine, that indicate diseases,” said Caroline Siegert, a scientist at IPA, “and do so without having to laboriously process the blood, but in one single step instead.”

The difficulty in detecting specific molecules in blood or urine lies in the enormous number of substances that are mixed in the liquid. They cause a high level of background noise that masks the desired signal. The signal from the protein being searched for can no longer be distinguished. Siegert added, “We can improve the signal-to-noise ratio with our technique, so we can recognize individual molecules even in blood samples.”

The researchers use magnetic beads for this – particles only a few micrometers in size that have a magnetic core. If a magnet is positioned externally on the test tube, it can arrest or steer the beads as needed. To isolate molecules from a solution like blood, researchers coat the surface of the beads with specialized antibodies. When the proteins being sought encounter the beads, the antibodies attract them. They can then be isolated and separated by the use of an external magnet.

To determine immediately whether the hunt for the proteins has been successful the Fraunhofer researchers developed an extra process: samples under investigation are not just exposed to the coated beads, but also to additional antibodies bound to fluorescent markers. These antibodies attach themselves to the target proteins and cause them to glow. The optical signal is very weak though, and would normally disappear in the background noise. But the IPA team have found a way to amplify it.

Applying an alternating magnetic field, causes the magnetic beads flock together in rhythm, and the fluorescent markers bound to the surfaces emit their light in sync – and therefore radiate considerably more brightly than individual beads. The advantage of this visualization technique is that the optical signal provides immediate insight about whether a tumor marker protein is present in the blood, for example. Long waits for expensive laboratory investigations are no longer necessary.