Metrology specialist believes momentum behind the change to EUV is now unstoppable. 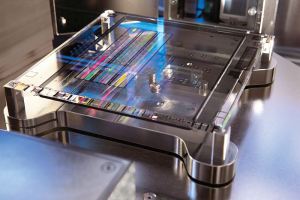 If the long-promised adoption of extreme ultraviolet (EUV) lithography for high-volume semiconductor chip production comes about, it will affect developers at all stages of the manufacturing and qualification cycle.

KLA-Tencor, the California-based supplier of metrology systems for semiconductor manufacturing with interests in the inspection of both wafers and photomasks, is as keenly aware of this as anyone.

CEO Rick Wallace told investors in January 2014 that the complexities of EUV technology would probably affect the company's schedule for ramping up investment in relevant inspection systems, with deployment now likely to take place towards the end of the decade. He commented that the company would be focusing its efforts on supporting the multi-patterning technologies that are likely to take on a higher burden of the lithography workload in the intervening period.

Expanding on the point for Optics.org, KLA-Tencor's Dan Wack indicated how the coming technologies might affect the company's different specialties.

"We are more of an observer than anything else when it comes to such a lithography transition, although we are certainly monitoring it very closely," he commented.

"On the wafers side of the house, we expect to see little impact. Although we will naturally be working hard to keep up with changes in wafer processing brought about by multi-patterning technology, the presence or absence of EUV will have less of an effect there. But the real impact for us will be the change it brings about in the nature of the photomasks used for lithography."

In particular, both KLA-Tencor and its customers are aware that actinic inspection, in which pattern mask inspection employs the same wavelength of light that the lithography system will use, has considerable advantages.

"Actinic pattern mask inspection activity is a must for the success of the lithography," stressed Wack. "It's hard to overstate the value of at-wavelength defect detection when making a decision on a photomask, and determining whether it can be used to print tens of thousands of wafers. So our customers believe we should make the transition to an actinic inspection platform when the change to EUV lithography happens."

EUV sources
When it ultimately arrives, EUV technology will usher in a new set of engineering constraints, among them the fact that EUV light at around 13 nm will only transmit through very low pressure environments. An ultra-clean vacuum will be needed if the optical systems are to approach acceptable working lifetimes.

"EUV mirrors are expensive, and we naturally want to minimize any loss of availability of the systems through necessary maintenance such as cleaning of the mirrors," noted Wack. "So new technology will be involved to achieve the required levels of cleanliness in such a vacuum system. We have a good starting point for that from our electron-beam inspection and metrology platforms, and we will be building on that through cooperation with suppliers of vacuum components. Those efforts are ongoing at a pretty good pace."

So too is the investigation into suitable EUV sources, which as Wack noted remains the most important factor of all in the coming transition.

"It is hard to obtain a source of EUV light with the right properties, and you need to work alongside all the suppliers to see how they might fit into the picture," he commented. "We are also working to develop a particular variety of that source technology, based on laser-produced plasmas, and for that we need a drive laser preferably in the 1 micron region, with around 1 kW of power and repetition rates of at least 5 kHz. Multiple possibilities exist in the market, so we do not have to do any major development on such a laser, but are starting to work with that."

End of the decade
CEO Wallace indicated to investors in January that KLA's production tool for EUV would now be likely to appear closer to 2020 than the 2017-2018 time frame that had been previously envisaged, coinciding with a wide-scale shift to EUV at the 7 nm node of semiconductor manufacturing; a sentiment confirmed by Dan Wack.

"The best we can tell is that EUV is not going to be used at the leading edge of the 10 nm mode, although it could still come in at the trailing edge. Most of the attention and focus is on determining if it can make the 7 nm node," he said.

"I have been involved in the program for six years. and through that time there have been quite a few ups and downs. From KLA-Tencor's perspective, we can't tell if these are the result of engineering hurdles, or if there are in fact real science issues remaining with the laser sources reaching their target power levels. But it seems safe to say that the roller-coaster ride is going to continue."