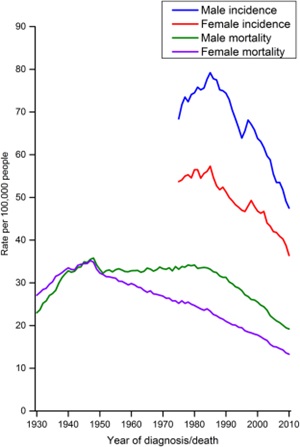 A major increase in the use of colonoscopy screening in the US has helped to improve survival rates for one of the most widespread forms of cancer, according to a new study.

The analysis of recent clinical data from every state in the US by the American Cancer Society (ACS) found that death rates from colorectal cancer - the third deadliest form of the disease in the US – had fallen by 3 per cent per year over the past decade.

That improving survival rate compares with only a 2 per cent annual drop each year during the 1990s, and the improvement has in previous studies been attributed to more widespread uptake of colonoscopy screening in recent years.

In addition, the rate at which US citizens aged above 50 – the age when symptom-free patients are first screened - are being diagnosed with colorectal cancer has also dropped by nearly one-third over the past ten years.

Based around the insertion of a flexible optical probe fitted with an image sensor into the colon and rectum, colonoscopies have the potential to prevent colorectal cancers because they enable the detection and subsequent removal of potentially dangerous growths known as polyps. According to the ACS, even though most polyps will not lead to cancer, removing them can prevent the disease from subsequently occurring.

“Unprecedented progress”
Richard Wender, an MD at the ACS and the organization’s “chief cancer control officer”, said of the latest findings: “These continuing drops in incidence and mortality show the lifesaving potential of colon cancer screening.”

However, he also pointed out the large number of people in the US who are yet to benefit from such screening programs. ACS figures suggest that some 20 million over-50s across the country – largely among the poorest in the US - have never been screened.

Highlighting the widespread nature of colorectal cancer, the ACS report estimates that more than 136,000 people in the US will be diagnosed with the disease this year, and that it will kill more than 50,000. Around one in 20 will be diagnosed with colon cancer at some point in their lives, and in January 2012 there were an estimated 1.2 million colon cancer survivors in the US.

“Increased use of screening tests in the past decade has led to unprecedented progress in reducing colon cancer incidence and death rates in the US,” states the ACS report. Since 2000, colonoscopies have almost tripled among adults aged between 50 and 75, up from just 19 per cent to more than half by 2010.

Full-spectrum potential
For those who have not been screened, studies suggest cost, lack of healthcare access – typically a result of not having health insurance – and a lack of information about the various tests available are to blame.

“While there has been dramatic progress in reducing colorectal cancer incidence and mortality rates over the past decade, striking racial and socioeconomic disparities remain,” the ACS study concludes.

Among the newer tests are computed tomographic colonography using X-rays and pill cameras that can examine the entire gastro-intestinal tract after being swallowed.

One new type of optical colonoscopy technology that has just showed promising results in a multi-center clinical trial incorporates a wider illumination spectrum and optical field of view that are designed to improve the detection rate of cancers and polyps.

Tested on nearly 200 participants at clinics in the US, Israel and The Netherlands in a trial funded by its Atlanta-based developer EndoChoice, the full-spectrum “Fuse” was found to give a significantly lower miss-rate for adenoma polyps when compared with standard colonoscopy, and although it did still miss some of those growths, none of these were regarded as “advanced” adenomas.

In their paper, published in The Lancet Oncology journal, the study authors concluded: “Full-spectrum endoscopy represents a technology advancement for colonoscopy and could improve the efficacy of colorectal cancer screening and surveillance.”