Scientific laser unit set to be sold for just $7.5 million, pending due diligence. 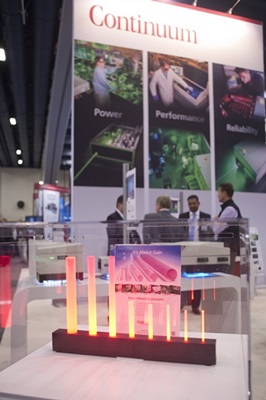 Scientific laser specialist Continuum is to be transferred to a new owner, after its parent company GSI Group agreed a $7.5 million cash sale to an unspecified buyer.

GSI announced the sale as part of its fiscal year 2013 financial results, during which it also highlighted a sharp slowdown in sales of scientific lasers in the closing quarter of the year.

San Jose-headquartered Continuum had contributed around $25 million to total GSI Group revenues of $342 million for the full year, suggesting something of a discounted sale by the parent company. “This move represents another step in our transformation of GSI, which focuses the company in our most attractive and sustainable growth markets,” said CEO John Roush, who signed a "letter of intent" regards the sale on January 31.

Elsewhere, GSI’s laser division – the company’s largest single business unit currently - looks to be performing well. Overall, laser revenues in the fourth quarter increased 3 per cent compared with previous year, reaching $48.8 million despite the hit experienced from the scientific market. “Excluding the scientific sales, laser sales growth would have been 8 per cent in the fourth quarter,” Roush said.

Scanning products, which GSI sells under its well-known Cambridge Technology brand, saw growth throughout 2013, ending up 8 per cent higher for the full year thanks to increased orders from applications including optical coherence tomography for retinal scanning, via hole drilling used in the microelectronics industry, and the emerging field of 3D printing.

Sales of sealed carbon dioxide lasers, sold under the Synrad brand name, also grew strongly, with sales up 12 per cent in the fourth quarter. That was primarily thanks to applications like coding, marking and engraving of organic materials, and follows the launch of versatile new pulsed lasers.

Process improvements bear fruit
GSI’s JK Lasers unit, which is focused on fiber lasers, has undergone a strategic rethink in recent months and underwent a major restructuring last fall. “We continue to participate in this market as a smaller player and we see growing demand off of our small base,” Roush told an investor conference call.

During the year, fiber laser sales increased only moderately – in the context of what is a fast-growing sector in general – to approximately $10 million. But losses in this business unit are now said to be “minimal”, with additional cost savings now identified and set to be implemented later this year.

GSI also says that it held its first ever “Kaizen” process improvement event on one of its laser production lines during the fourth quarter. According to the company’s executive team, the project both improved productivity and reduced lead time by more than 40 per cent within just a single week.

Not surprisingly, that has already been followed up with three more such events across the company and GSI is planning to hold at least one per month for the rest of this year.

For the full fiscal year, pre-tax profits of $14.5 million were up from $11.5 million in the prior year as the company looked to have put the upheaval of recent times well behind it.

With net debt standing at $10.5 million at the end of 2013, GSI is now looking to expand its activity significantly with the impending $93.5 million acquisition of the machine vision specialist Jadak Technologies.