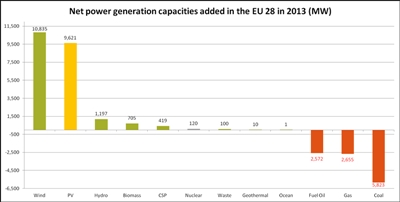 Added capacity in 2013 by fuel type (click to enlarge)

After another record-breaking year for solar photovoltaic installations, and in spite of a sharp slowdown in the German market, the European Photovoltaic Industry Association (EPIA) says that total global PV capacity now stands at a cumulative 137 GW.

The EPIA reckons that 37 GW was added during 2013, led by deployments in China and Japan as the Asia-Pacific region was confirmed as the new center of gravity for solar.

And that has particularly impacted the market in Italy. Ranked as the third-largest global market in 2012, it experienced a 70 per cent decline last year. Germany, which thanks to its early adoption of a feed-in tariff had been the leading global PV market for a decade, also experienced a steep decline (57 per cent) after intentional regulatory changes. 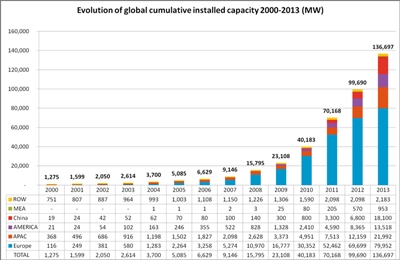 “From 0.3 per cent of Europe's electricity needs in 2008, PV already covers as much as 3 per cent only five years later,” added Hoffmann, before warning: "Only with coherent, dynamic, stable and predictable support policies can Europe regain a leading position in the energy revolution and further develop PV markets.”

“In view of that, a truly ambitious climate and energy policy framework for 2030, that would include a meaningful and binding renewables target for each individual [European Union] member state, is absolutely crucial,” he concluded.

Market break out
According to the preliminary data, which will be updated in EPIA’s full report due to be released in June, the top three countries in 2013 by installations were China with 11.3 GW, Japan with 6.9 GW and the US with 4.8 GW.

Those figures for China and Japan were higher than initially forecast by solar industry analysts at the start of last year, while the figure for the US was more predictable as more than half of the total related to large utility PV projects that have been long in the planning.

The EPIA’s figure for the US also tallies with the total announced by the US-based Solar Energy Industries Association last week in its joint report with analysts at Greentech Media Research.

Elsewhere in Asia, India is believed to have installed some 1.1 GW in 2013, along with 442 MW of peak capacity added in Korea and another 317 MW in Thailand.

Back in Europe, 2013 saw the German market slip to 3.3 GW, down from 7.6 GW in 2012 as new regulations designed to cap PV installations had the desired effect. 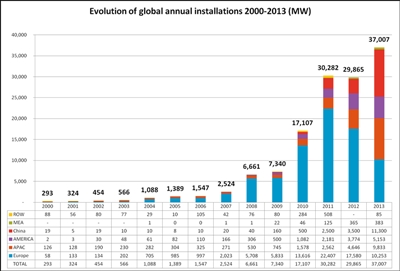 Meanwhile Italy still accounted for between 1.1 and 1.4 GW, a similar level to Greece, Romania and the considerably less sunny UK.

Significant declines were also reported in Belgium, France and Denmark, but overall the European market outside of Germany and Italy has remained stable at around 6 GW per year.

Potentially large markets in Hungary, Poland and Turkey remain virtually unexploited, while Spain has yet to see a significant return of demand since its damaging boom and bust period of 2007-2008.