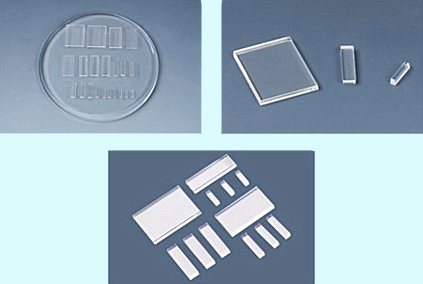 The FTTH market is a great opportunity for PLC splitter chip sales.

Sales of planar lightwave circuit splitters reached $529.6m in 2013, according to market analysis by ElectroniCast Consultants, released February 20. These devices will play important role in the continuing growth of fiber-to-the-home networks as they enable a single passive optical network interface to be shared among many subscribers.

At the same time, the company also published its analysis of the global consumption of fiber optic point sensors and continuous distributed fiber optic sensors. Sales of these devices will grow 18% per year from $1.89bn in 2013 to hit $4.33bn in 2018 (see below).

First considering splitters, Stephen Montgomery, Director of Fiber Optics Components at ElectroniCast, said, “The PON-based FTTH network application is dominating the worldwide planar lightwave circuit (PLC) splitter consumption value in 2014. While the Americas region is forecast for flat annual growth of about 1% over the 2013-2018 period; EMEA is set for 7% growth per year; and Asia-Pacific should increase at 15% per year, for component-level PLC splitters.”

Montgomery added, “As the demand for larger quantities of optical communication components evolve, technologies, which are friendly to automation assembly processes, will have a competitive manufacturing and cost advantages. Use of silicon wafers, for example, draws extensively on the mass-production techniques of the commercial integrated circuit production processes.” 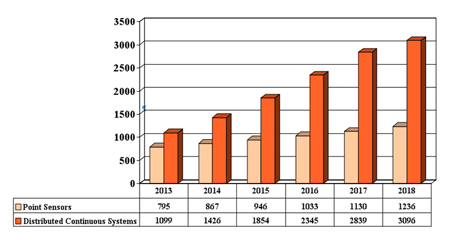 The use of distributed continuous fiber (DCF) sensors in the military, aerospace and security application category will maintains its sector lead in 2014, followed by the petrochemical and energy sector. The civil engineering and construction sector is also forecast for strong growth. Inspection and quality control frequently constitute the largest portion of production costs for many industries.

“The biomed and science sector is a relatively minor user of DCF sensors, since the length of optical fiber is short versus the other applications; so average selling prices for these sensor systems are low compared to the larger (longer length of optical fiber) DCF sensors for other applications. The consumption value of these sensors should grow at 23% per year from $1.1bn in 2013 to $3.1bn in 2018.”