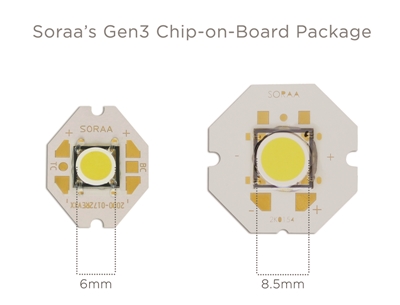 Soraa, the vertically integrated LED lighting company based in Silicon Valley, says that its forthcoming lamps will feature LEDs with a record-breaking electrical efficiency of 75 per cent.

The new devices, based on the company’s third generation of “GaN-on-GaN” technology, are said to outperform their nearest competitors by a staggering 20 per cent at normal operating conditions.

The progress means that in the past year Soraa has increased the efficacy of its LEDs, in terms of their white lumen per watt (lm/W) output, by more than 30 per cent over the prior generation.

Soraa told optics.org that the absolute lumer-per-watt performance achieved depended on the specific spectrum, correlated color temperature (CCT) and color rendering properties of each device, and that the 30 per cent improvement represented the average gain in performance across all product types.

That improvement has come primarily from the light-emitting structure of the devices, although the company says that its three-phosphor architecture and materials have also been improved.

The technology is set to become available in the second quarter of 2014 across a variety of product lines including modules, large-form-factor PAR and AR lamps, as well as MR16 lamps designed to replace power-hungry halogen bulbs.

“Soraa’s full-visible-spectrum PAR30L lamp, powered by its Gen3 LED, will lead the market not only in light output, but also in color and whiteness rendering,” announced the company ahead of a launch at this week’s Strategies in Light event in Santa Clara.

"Soraa’s Gen3 GaN on GaN LED package is a major milestone for the LED industry and a truly disruptive innovation. We have achieved a 30 per cent lm/W efficiency improvement over our previous generation white LEDs, and what’s amazing is that we expect to repeat these significant year-over-year performance gains in the future."

The high performance of the devices relates directly to Soraa’s adoption of native gallium nitride substrates upon which light-emitting layers of the same semiconducting material are grown.

Virtually every other major LED maker uses sapphire or silicon carbide substrates, technologies that are much more mature but which have a lattice mismatch with the GaN emitter layers that ultimately has an impact on device performance. Others are now using silicon substrates, which are typically cheaper but have a larger mismatch with GaN.

The use of GaN substrates has always offered a superior technological solution in theory, but until Soraa’s intervention the approach had largely been considered too expensive for cost-sensitive markets like general lighting.

As such, the company says that the efficiency levels that it is now demonstrating are out of reach for other LED manufacturers, although rival LED makers such as Cree are continuing to push the white-light efficacy of their lamps.

On cost, Soraa told optics.org that it expected its new products to be competitive with such rivals.

The company, which currently fabricates all of its LEDs at its California production facility, announced a further commitment to US manufacturing last November, with a deal to create 400 jobs at a new chip factory in Buffalo, New York. That site is slated to begin operations in 2015.

Following the Strategies in Light event, Soraa will show off the new Gen3 technology at the Light + Building show, which runs March 30 to April in Frankfurt, Germany.