Seminar in San Francisco hears that sensing applications will be a key growth driver in the coming years. 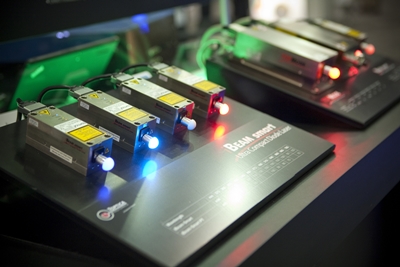 The global laser industry, strong in many areas but still evolving, is set to grow another 5 per cent to $9.2 billion this year. That was the headline conclusion from market analyst Allen Nogee, senior analyst at publisher Pennwell and a keynote presenter at last week’s Lasers & Photonics Marketplace Seminar in San Francisco.

Timed to coincide with what turned out to be a buoyant Photonics West conference and show held in the same city, the seminar included talks on the hot topics of 3D printing and high-power fiber lasers, as well as the wider overview from Nogee.

From its dawn back in the late 1960s, the analyst said, the fortunes of the laser business have generally tracked the Dow Jones industrial average - usually lagging the stock index by a quarter.

However, since the financial crisis of 2008, the laser sector’s return to the steep positive gradient established in the mid-1990s has seen its expansion somewhat decouple from that of the stock market.

The resurgence in laser sales since 2010 preceded the Dow’s own bounce-back, and with a majority of the 130 seminar attendees indicating in a straw poll at the event that their fortunes were still improving, 2014 would appear set to continue in similar vein.

Moving onto the major trends of 2013, Nogee noted several positive developments including China’s GDP growth, plus a strong upswing in US car sales – a sector that has witnessed heavy investment in lasers in recent years. The imposition of a 2.3 per cent medical device tax in the US did not dampen a good year for medical lasers, while fiber and diode sources continued to improve in performance and drop in price.

On the negative side of the ledger Europe’s GDP growth remained weak in 2013, while a recovery in the semiconductor industry dragged, scientific and military markets stayed sluggish, and the optical storage business is fading away.

“The key application market shares in 2013,” Nogee reported, “were communications (31 per cent), materials processing (17), photolithography (9), optical storage and medical (both 8) and sensors (7).

“Communications will continue to grow in 2014 with 100 and 200 Gb/s network upgrades and fiber-to-the-home deployments,” he added.

Moving on to discuss displays and entertainment, Nogee said bluntly that the once-hot expectations of a large market for smart-phone projectors was “now dead”, although there remain brighter prospects for larger laser projectors, laser light shows, and digital cinema projection that “would soon be coming to a theater near you.”

Other laser-hungry technologies now taking off include head-up displays and home projection systems, for example the Sony 4K Ultra Short Throw Projector 146-inch system. Growth in this area would be around 15 per cent in 2014 and a further 10 per cent in 2015, pushing towards $250 million in total.

Sensing, sensing, sensing…
Nogee also stressed the importance of sensing applications for lasers, whether for spectroscopy, buildings and infrastructure systems, homeland security, oil and gas or retail technologies. Together, these markets should grow at about 8 per cent per year to reach $700 million by 2015.

Another boost for laser sales is expected in the medical sector, which will benefit from the aging global population, improvements to healthcare in emerging economies, the development of non-invasive treatments and growing use of lasers in dentistry.

Still growing in value by more than 10 per cent per year, the laser types used in the medical market are headed by diode-pumped solid state designs (33 per cent), followed by lamp-pumped solid-state (28), CO2 (14) and diode (12) sources.

Laser marking enjoyed what Nogee described as “a solid year” in 2013, for example finding new applications in the food industry, for example. With overall sector sales growing at an average 7 per cent through 2014, major player Trumpf doubled the size of its Swiss marking plant last year.

Wrapping up, the analyst concluded that, for laser companies, the major growth areas to look out for in the future would include fiber and ultraviolet lasers for manufacturing, the displacement of conventional production technologies by 3D printing, flow cytometry and low-cost spectroscopy and sensing.

“Sensing, sensing, sensing,” he reiterated - in case the audience didn't take the hint - as well as head-up displays, laser light sources and “marking of everything”.