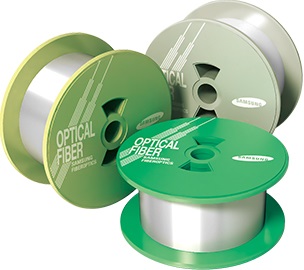 The division, which Samsung began 30 years ago, is formally known as Samsung Electronics Hainan Fiberoptics, and should become part of the Corning business by the end of March next year – assuming that regulators approve the deal.

“When complete, the acquisition will augment Corning’s market access and enhance its broad portfolio of optical communications products in Asia,” said the US firm. It will integrate the business, which includes a manufacturing facility in Gumi, Korea, and another in Hainan, China, into its optical communications business segment.

That part of the Corning business accounted for 30 per cent of total company sales in 2013, equivalent to around $2.6 billion. Terms of the Samsung deal were not released, but in the Korean conglomerate’s most recent financial report the subsidiary was attributed assets amounting to KRW 111,367 (approximately $100 million).

Samsung claims that the division has around a 30 per cent share of the Korean market for broadband networks, and exports to customers as far afield as Portugal and Vietnam.

Its products include a range of single mode optical fibers, including the “Widepass” fiber for long-haul and local access applications. It features broadband transmission across the full 1260-1625 nm wavelength range, as well as low attenuation in the 1360-1460 nm E-band region thanks to elimination of the water absorption peak.

The division being acquired by Corning also offers “Ultra Bendfree” fiber designed for in-home networking applications that require superior performance so that the cables can be bent around sharp corners.

China trade dispute over Indian fiber
In a Corning statement Clark S. Kinlin, executive VP president of the firm’s optical communications business, said: “We are very excited about the growth opportunities in Korea and the emerging economies in Southeast Asia.

“Once we are joined by Samsung Electronics’ experienced workforce, I look forward to the team building out Corning’s global scale and scope to better meet customer needs for innovative fiber-optic solutions.”

The move is not Corning’s first foray into Asia, and the company already has fiber manufacturing sites in China and India, as well as North Carolina. The optical draw facility in India is the newest of those - it commenced operations two years ago and reached full-scale production capability in mid-2013.

However, shortly after that China’s Ministry of Commerce (MOFCOM) initiated anti-dumping trade action proceedings against Corning regarding the single-mode optical fiber produced at the Indian facility and exported to China.

Corning does not believe that it violated any applicable trade laws, but warned that the anti-dumping legislation allows great discretion to the investigating authorities, particularly where a start-up operation is involved.

A final determination is expected by next February 2015 and if it goes against Corning would result in the imposition of an anti-dumping margin on single-mode optical fiber exported from India to China for a period of at least five years.

The acquisition of Samsung’s facilities in Korea and China may help the company to deal with such an outcome.

From Samsung's point of view, the Corning deal represents another step in the strategy to focus on its core electronics business. Last month the company said that it would exit the LED lighting sector, aside from in the domestic Korean market.