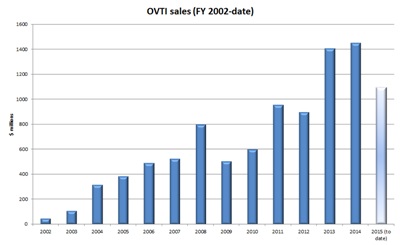 That improvement comes in spite of heavier research and development spending, as the company begins the launch of its new “PureCel-S” image sensors, which are based on three-dimensional, or stacked-die, designs.

CEO Shaw Hong told investors that he was excited about the launch of high-performance sensors based on the new chip architecture, and a suite of products with resolutions ranging from 13 megapixels up to 23 megapixels is in the pipeline.

Those launches follow the recent ramp into volume production of OVTI’s “PureCel” range, which offered higher light sensitivity and power efficiency, along with the better image quality. The stacked-die approach will enable more compact high-performance cameras along with faster processing speeds.

That ramp has had another beneficial effect, with OVT able to diversify its supply chain and use a greater number of foundry partners – keen to participate in what is one of the fastest-growing segments of the wider semiconductor market – to actually fabricate the chips.

No word on China equity bid
The CEO was much less forthcoming on the subject of a potential takeover of the company by a Beijing-based investment group, however. The Hua Capital Management (HCM) proposal of a $29-per-share acquisition remains under review by the OVT board of directors, but Hong declined to comment any further than that in an investor call to discuss the latest financial results.

What he was much happier to highlight was what he called the “rapid emergence” of India as a key market. In terms of mobile handset users, it ranks second only to China, and the global popularity of the selfie means that more handsets than ever are shipping with front-facing cameras to the country.

At the same time the transition to the much faster “long-term evolution”, or LTE, cellular networks in China means that users are now able to send and share higher-resolution images, meaning that handset camera quality has become a key differentiator in the country.

Outside of the handset market, which accounts for around three-quarters of the demand for OVTI’s image sensors (total shipments by the company in the latest quarter reached 246 million), the company also described automotive applications as a “bright spot”.

Hong declared himself extremely pleased with sales growth here, which results from new driver safety features including rear-view cameras, automatic detection of pedestrians and other hazards in front of the car, and so-called “surround-view” features, which require cameras on all sides.

The automotive sector remains very much an emerging market for OVT, together with security and medical applications accounting for less than 10 per cent of the firm’s overall sales currently.

But Hong added that the first disposable endoscopes featuring OVT’s image sensors had now entered mass production - suggesting that this proportion may start to grow soon.

For the current quarter, which is seasonally much weaker because of the timing of shipments needed for the forthcoming holiday period, OVT’s executive team is anticipating sales of between $275 million and $305 million.

That would be significantly lower than the $352 million posted for equivalent quarter in fiscal 2014, and OVT’s stock price slipped back by around 3 per cent in after-hours trading on the apparent disappointment.

At around $26, the stock continues to trade slightly below the cash acquisition price proposed by HCM back in August.