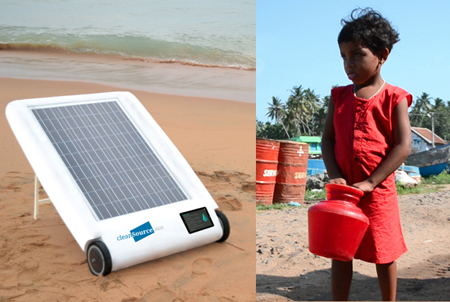 Water, water, everywhere: but 97% of the world’s water is salt water.

A campaign intended to deliver sustainable, pure drinking water to up to a billion people without a clean water source has been launched by British company Desolenator. The company has developed a product that harnesses the power of the sun to convert seawater into drinking water.

Desolenator’s product uses a patented technology to transform salt water and other non-salty dirty waters into pure distilled water. Capable of producing up to 15 liters per day, the product requires no power supply, other than the sun, and has no moving parts or filters, meaning easy maintenance. The unit uses no consumables and the developers say a one-off payment will provide water for households for up to 20 years.

However the product is not yet ready. Whilst the team has assembled a fully working prototype, Desolenator needs further investment to take it from prototype to production. This week, the company launched an Indiegogo crowdfunding campaign to raise $150,000 to take the development further.

“Desolenator is different from existing desalination and home water technologies – it harnesses solar power in an elegant new way, maximising the amount of solar radiation that hits the technologies surface area through a combination of thermal, electrical and heat exchange, creating pure clean drinking water through the power of the sun.” 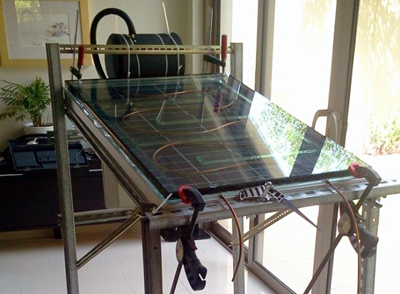 Janssen explained how the device works: 'Think of a solar panel in a hot and arid location. Solar panels are capable of transforming about 15 per cent of the solar energy they receive into electricity. But the rest of that energy – 85 per cent – is lost in the form of heat, which means that solar panels can get very hot in those regions. What we have done is completely reverse-engineer the solar panel: we didn't cool it down; on the contrary, we insulated with double glazing and foam. So now the panel gets even hotter.

”To cool it down, we flow a thin film of sea water over the hot solar panel. This cools the panel down and the seawater picks up all that heat, raising its temperature to 100C. Then we siphon the water off at the other end and transfer it to a kettle. There we boil the water with the electricity produced by the solar panel. We harvest the energetic water vapor and feed it back into the insulated solar panel and use heat exchange to recover that energy. The vapor condenses and sweet water comes out of the device at the other end.’’

Andrew Burford, Entrepreneurship Lead, at London,UK-based Climate-KIC UK, who recently awarded Desolenator a place on its accelerator program, commented, “What has really sparked the interest of the judges is the massive impact it can make to humanity and the fact that this can be rolled out at real scale. We saw this as a major humanitarian product but also a product that has a real commercial potential.”

Desolenator was founded in 2012 when William Janssen came up with a new idea for utilising the full potential of solar energy to turn seawater into drinking water in water-stressed areas of the world. Since 2013 the international company – a UK venture, with a Dutch CEO and teams in India and Abu Dhabi – has been working with Innovation Experience to make Janssen’s ideas a reality, culminating in the creation of a prototype and a recent award from ClimateKIC, which sees the company become part of Imperial College’s accelerator programme for clean technology companies.

The following video shows how the aims of the Desolantor campaign and how the system works: