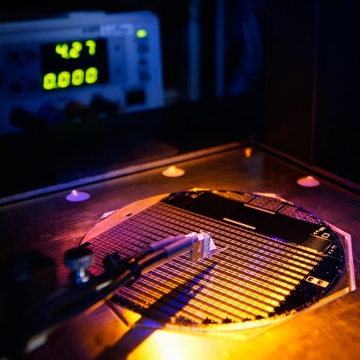 As trailed in its financial results last month, Soitec and its technical collaborators have set a new world record for solar cell efficiency.

The research-grade multi-junction cell developed by the French company along with CEA-Leti and the Fraunhofer Institute for Solar Energy Systems (ISE) operates at 46 per cent under x508 solar concentration – an improvement on the same team’s earlier mark of 44.7 per cent.

Confirmed in tests at Japan’s National Institute of Advanced Industrial Science and Technology (AIST), the record-breaking device is based on four sub-cells, or “junctions”, that are collectively able to convert a much broader range of solar wavelengths into electricity than more conventional silicon cell designs.

The company says that it is already establishing a production line in France to make the advanced devices in volume, while it believes that the long-targeted goal of 50 per cent efficiency is now within reach.

The research team said that achieving the optimum distribution of the photons among those four sub-cells represented one of the particular challenges of the advanced design.

“This has been achieved by precise tuning of the composition and thicknesses of each layer inside the cell structure,” they reported.

Frank Dimroth, project manager for cell development at the Fraunhofer institute in Freiburg, described the result as a “major milestone” for the French-German collaboration. “We are extremely pleased to hear that our result of 46 per cent efficiency has now been independently confirmed by AIST in Japan”, he said.

Since acquiring the Fraunhofer ISE concentrated photovoltaics (CPV) spin-out Concentrix Solar back in 2009, Soitec has been working to commercialize the technology, which has some advantages over conventional PV in hot, sunny climates. Crucial to the approach is the pace at which the efficiency of multi-junction concentrator cells has been improved. 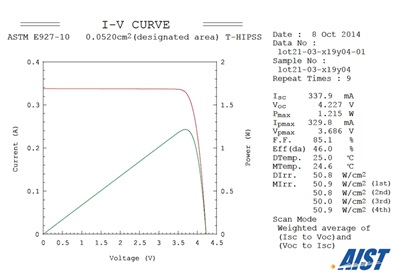 50% efficiency “in near future”
Over the past decade, the efficiency of the best-performing multi-junction research cells has risen from around 38 per cent to 46 per cent (see NREL's cell efficiency chart), while achievement of 50 per cent conversion efficiency is thought to be within reach with further refinements.

At the same time, the best crystalline silicon cells have improved only marginally in terms of efficiency, but a massive investment in production – largely in China – has driven down the cost of the technology relentlessly. That is one of the key reasons why so many CPV firms have gone out of business over the past few years.

There have been some positive developments in CPV: notably Soitec’s establishment of a major module manufacturing facility in San Diego, California, and its completion of a large CPV power plant in South Africa. But the nature of the highly competitive PV market has proved costly to the company in the meantime.

If and when the latest record-breaking cells can be incorporated into CPV module and system designs, they promise to further reduce the cost of solar electricity through technology refinement rather than production scale-up, with CPV generation set to become ever more cost-competitive as the efficiency figure improves.

Jocelyne Wasselin, Soitec’s VP of solar cell product development, suggested that the company was already well on the way towards manufacturing the four-junction cells in volume at its base in France:

“[This new world record] confirms we made the right technology choice when we decided to develop this four-junction solar cell, and clearly indicates that we can demonstrate a 50 per cent efficiency in the near future,” she said.

“To produce this new generation of solar cells, we have already installed a line in France. It uses our bonding and layer-transfer technologies and already employs more than 25 engineers and technicians. I have no doubt that this successful cooperation with our French and German partners will drive further increase of CPV technology efficiency and competitiveness.”