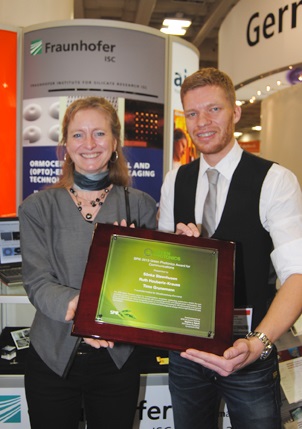 The round includes a private contribution from CEO Ruth Houbertz, and was led by specialist investor High-Tech Gruenderfonds (HTGF). The Fraunhofer’s own Munich-based venture wing also took part, as did private investor Boris Neubert.

Houbertz told optics.org that the seed finance, formally closed at the end of October, would be used hire more staff to build the company’s third “GEN1” stand-alone equipment, and also to support an expansion of the firm’s production capability – specifically to scale up 3D printing in MPO’s application lab from the current sub-100 nm size to the centimeter-scale.

MPO’s equipment is intended to enable the low-cost manufacture of waveguides used in optical interconnects – thereby supporting the adoption of optical data links at the chip level.

“Driven by a continuously increasing demand on bandwidth and by a tremendously high energy demand, optical data transfer on short length scales [is becoming] more and more important,” said the firm in a release announcing the funding.

The manufacturing technology, initially developed by Houbertz and colleagues at the Fraunhofer Institute for Silicate Research in Würzburg, will provide customers with a scalable, low-cost manufacturing process to make the waveguides. The resulting optical links promise to speed up chip-scale communications while simultaneously cutting energy demand – now a huge factor in the cost of running data centers.

Green photonics
At the Photonics West exhibition in 2013, the approach won Houbertz and her team the Green Photonics Award for optical communications applications. The two-photon laser fabrication technique – from which MPO derives its company name – is seen as much faster and more efficient than the conventional ultraviolet lithography approach to making waveguides.

“Complex assembly steps can be avoided, since the assembly is carried out prior to the fabrication of the optical links,” says the firm. That is in contrast to conventional fabrication, where assembly takes place after waveguide fabrication.

Guillem Sague, an investment manager at HTGF covering photonics technologies, sees vast potential: “MPO’s technology is as disruptive for the production of optical packages as classical 3D printing has been for metal and plastics,” he said.

Maximilian Frank and Yannick Wilden from Fraunhofer Venture added: “We are convinced that the technology developed by the founder Ruth Houbertz and her students at the Fraunhofer ISC and licensed to MPO, in combination with MPO’s solid know-how, will revolutionize optical data transfer.”

Houbertz is already working on attracting the next round of venture financing, and presented the company’s credentials at the recent Invest in Photonics event in Bordeaux, France. “I will roughly need about €2.5 million,” she said. “There are already people [showing] interest who wanted to be included in the first round. I am confident that I will be able to raise the money with the current team.”

The CEO has plans to hire a second executive during the course of next year. “However, the emphasis is presently on hiring excellent staff for running our customers’ projects and further developments,” she told optics.org.

MPO is due to exhibit at February’s Photonics West 2015 event, where Houbertz says it will announce its first “GEN1” stand-alone product, the LithoProf3D, as well as present its prototyping and small series fabrication service offerings.

The LithoProf3D has also been short-listed for a Prism Award at the San Francisco show.