This week, Euromold, the global fair for moldmaking and tooling, design and application development is taking place in Frankfurt am Main, Germany. More than 1,000 exhibitors are presenting the latest molding, prototyping and manufacturing technologies, including a significant number of photonics-based and laser additive manufacturing / 3D printing systems.

Here, optics.org presents a selection of this year's launches and demonstrations which reveal how photonics technologies are becoming ever more important in industrial prototyping and manufacturing: 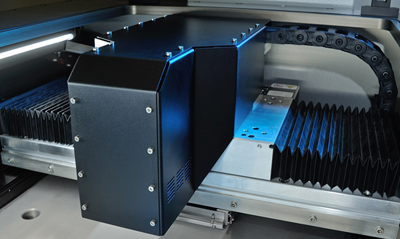 Additive manufacturing via SLM has been successfully used to make prototypes and small-series production runs of predominantly compact components. But users now want the ability to increase productivity via higher build-up rates, and would like more flexibility in terms of available building space.

So far, productivity has mainly been boosted by using higher laser power in combination with optics that allow operators to adjust beam diameter. Covering larger building spaces is currently achieved by the use of a movable single optical system or scanning multiple parallel beam sources.

The advantage of multi-spot processing is that it means the system's build-up rate can be increased significantly by adding a virtually unlimited number of beam sources – with no need for modifications to the system design, exposure control software or process parameters. The new plant design also makes it possible to increase building space simply by extending the travel lengths of the axis system and without changing the optical system. 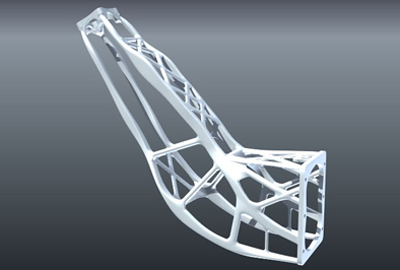 A collaborative project between RUAG, Altair and EOS shows the optimized development of a satellite antenna by 3D printer. The team says this development, which is designed for an earth observation satellite, is one of the highlights at Euromold.

RUAG, Altair and EOS collaborated in the development of the antenna section for the Sentinel 1 satellite. They developed the revised mounting, optimized for production in an industrial 3D printing process. The objective was to make the new aluminum component much lighter while keeping its strength, and to make the best use possible of the design freedom that the additive manufacturing process offers.

As a result, the finished component is almost only half the weight of the previous component and at the same time considerably more rigid. In space navigation, weight saving in particular is a decisive factor, because the lighter a satellite, the more cost effectively it can be launched into space.

EOS itself is presenting its latest AM systems, including the EOS P 396, EOS M 400, and the more recently released EOS M 290. Along with the systems, the company is introducing an update to its EOSTATE Quality Program. The EOS M290 is the latest addition to the company's metal-processing range of 3D printers; the EOS P 396 and EOS M 400 AM systems were launched in December 2013. 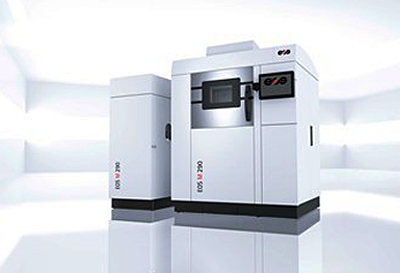 The M290 is EOS's latest addition to its metal-processing range of 3D printers.

The M290 is a newer metal AM system that works with everything from light metals to stainless steel and superalloys. Powered by a 400W fiber laser, its build area is capable of operating in protective nitrogen or argon atmospheres.

Renishaw is exhibiting its latest range of additive-manufacturing machines and precision metrology systems. The company is demonstrating the most recent developments in the manufacturing capabilities of its laser melting machines. Visitors can find out more about products made using additive manufacturing, including the famous Empire Cycle's bicycle with the world's first 3D printed metal frame. There will also be a range of samples for the dental industry and a set of wheel hub carriers produced for the University of Stuttgart's Formula Student GreenTeam.

Smart Optics is presenting its universal 3D scanner Activity 710. Original forms or completely individual objects with a maximum size of 80x80x80 mm, such as prototypes of specially designed jewellery, can be digitised. The object holder specially developed by smart optics for the Activity 710 enables a flexible set-up of various objects.

The holder can even be used for delicate items. The control and capture of hard-to-reach places is not a problem for the axle system. The corresponding software can effortlessly merge two scans of an object into one scan and undo it, so as to produce an optimal scan.