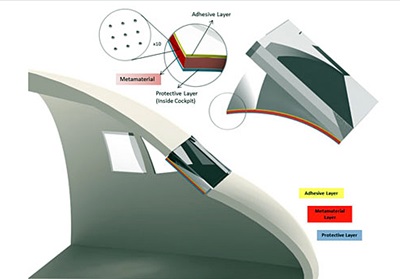 Lamda Guard, the Canadian company that has devised a nanoparticle-based optical film to protect airplane pilots from laser attacks, has won an award for “product leadership” from the consultancy firm Frost & Sullivan.

The firm’s “metaAIR” transparent films use arrayed nanoparticles arranged with a specific periodic geometry to protect flight crews, in what looks likely to become the first major commercial application of metamaterials.

Its ultra-thin films selectively reflect light in a narrow frequency band determined by the metamaterial geometry, thus taking advantage of one of the key characteristics of any laser – its very narrow emission wavelength – while remaining otherwise transparent.

According to Lamda Guard, the films can be stuck to the inside of standard cockpit windows or windshields, without requiring pilots and other crew to wear any potentially compromising safety eyewear or special goggles for night vision. Multiple wavelengths can be blocked, so that pilots can be protected from both green and blue lasers.

“The metaAIR is quick-to-install, long-lasting, and cost effective,” states the company, which is based in Halifax, Nova Scotia. Earlier this year, it signed an agreement with aerospace giant Airbus to test the technology.

Unrivalled solution
Thomas Saquer, one of Frost & Sullivan’s army of consultants, said of the metaAir: “Unlike competitors' existing products, which only provide limited and/or temporary protection, the metaAir can be integrated during either aircraft forward-fit or retrofit operations.

His colleague, analyst Alix Leboulanger, called it an “unrivalled” solution, and predicted: “metaAIR could become a standard in the industry and perhaps even become mandatory with the passing of stricter safety regulations.”

The MTI stable of subsidiaries also includes Lamda Solar, which is targeting the photovoltaics industry with a promise to improve solar panel efficiency, and Lamda Lux, which is aiming to have a similar impact on LED lighting.

MTI’s CEO George Palikaras, also a senior visiting research fellow in the electronic engineering department at Queen Mary University of London (QMUL) in the UK, is an expert in metamaterials and has been working on commercialization of the technology since 2010.

Lamda Guard has also established an office in London and a research collaboration with QMUL’s Clive Parini, who heads up a group focused on antennas and electromagnetics at the institution.

Laser attacks have become a growing threat to aircraft, with a recent report from the US Federal Aviation Administration (FAA) finding that the number of incidents increased from 1527 in 2009 to 3960 last year - despite penalties for aiming a laser at a plane being stepped up by the FAA in 2012.

The Frost & Sullivan award is presented each year to companies that it considers to have demonstrated innovation in product features and functionality, with particular recognition of rapid acceptance in the marketplace.