‘ProX 400’ additive manufacturing system set to be showed off at next week’s EuroMold trade show in Frankfurt. 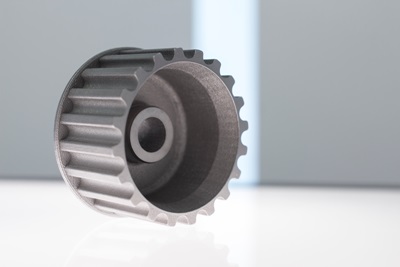 3D Systems, one of the highest-profile vendors of laser additive manufacturing systems for 3D printing of metal parts, is set to show off a new dual-laser tool in Germany next week.

At the EuroMold 2014 manufacturing trade show in Frankfurt, it will preview the “ProX 400” direct metal sintering system – said to be capable of making larger high-quality metal parts than any competing system.

“For parts up to 500 x 500 x 500 mm3, the ProX 400 produces strong, fully dense metals and exceptional surface finish,” claims the South Carolina firm, adding that it does so without the complexity of multi-step machining or the time and expense of tooling.

CEO Avi Reichental said that the new tool added “best-in-class” productivity – something that results from the use of two lasers for faster production speeds.

“Our direct metal printers and the ProX 400 are redefining metal manufacturing and the products they go into,” he added. “Aerospace companies can make lighter weight parts that are simpler, require fewer assembly steps and offer better reliability.

“Manufacturers can create geometrically complex parts that could never be cast or machined. Medical device makers can print bio-compatible, patient-specific surgical implants in a manner that is scalable and cost efficient. The ProX 400 is changing the metal manufacturing paradigm from A to Z.”

15-minute turnaround
Thanks to the additional laser, the ProX 400 is said to be able to turnaround print jobs in as little as 15 minutes.

According to a company brochure, the new tool features two 500 W fiber lasers operating at a wavelength of 1070 nm. It is said to be capable of fashioning parts out of more than a dozen ferrous and non-ferrous metals and alloys, including stainless and tooling steels, aluminum, cobalt chrome, and titanium.

Parts are built up layer-by-layer, with a layer thickness range of between 10 and 100 µm, and a minimum detail resolution of 100 µm in the x-y plane and of 20 µm in the z-axis.

The ProX 400 is just one of several new product launches planned by 3D Systems for the Frankfurt event. They include the “ProX 800” fab-grade stereolithography printer, and a new selective laser sintering system said to be compatible with glass, aluminum and nylon materials.

Last week 3D Systems revealed that its sales had grown 23 per cent year-on-year in its latest financial quarter, to $166.9 million. Meanwhile its order book is swelling on what the company described as “robust” demand.

And despite a delay in shipments meaning that sales revenues were not quite as high as had previously been expected, the company maintained its projection of posting annual revenues of between $650 million and $690 million – representing around a 30 per cent jump on last year’s $513.4 million.