ASML, the semiconductor lithography equipment specialist, has recognized the sale of two extreme ultraviolet (EUV) systems in its latest financial quarter – after customers demonstrated that the kit was capable of producing 500 wafers within a 24 hour period.

That performance level with its shipped “NXE:3300B” EUV system had been set as a benchmark for the end of the year, and all of these installed systems have now been upgraded with the source power and stability needed to hit the target consistently.

A third system has just begun exposing wafers at a customer site, ASML said, and should be included in its sales figures for the closing quarter of calendar 2014 – although true production insertion of EUV for commercial chip manufacturing (requiring throughput of 1500 wafers per day) is still not expected for another two years.

“We are working with a customer towards a mid-node insertion of EUV at the 10 nanometer logic node expected in late 2016,” said ASML’s CEO Peter Wennink. “Other customers are preparing for initial learning in a manufacturing environment.

“In this scenario we expect to ship around six NXE:3350B systems starting mid-2015, on top of the three NXE:3300B systems that will be converted to NXE:3350B configuration.”

In its latest investor presentation, ASML highlighted that it has reached a conversion efficiency of 4 per cent with its laser-driven EUV sources. Source powers of 80 W are said to have been demonstrated internally. 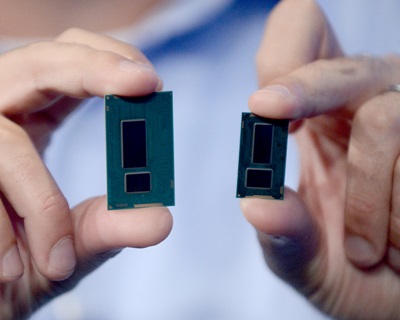 Logic ramp boost
The update came as ASML reported sales of €1.3 billion for the third quarter of 2014. That figure is nearly identical to sales posted in the third quarter of 2013, but this year profits are up, with net income of €244 million compared to €193 million a year ago. The latest quarterly figures comprised the sale of 30 lithography systems worth a total of €884 million, plus service and field sales options of €438 million.

That is in line with ASML’s prior expectations, and the company still expects to post annual sales of "at least" €5.6 billion for 2014. The total will be close to its best-ever annual result, of €5.65 billion back in 2011.

“Looking ahead, we see a solid start to 2015. In memory, we expect higher sales in H1 driven by the strong backlog. In logic, the ramp of 20/16/14 nanometer nodes is expected to continue,” said Wennink, adding that the exact timing of that ramp would be subject to decisions made further up the value chain.

ASML’s outlook came shortly after Intel surprised markets with an upbeat report on its own latest quarter, as the PC market showed an unexpected rebound.

Intel is in the process of ramping production of its latest logic circuits, claiming that the “Broadwell” design represents the first true volume introduction of 14 nm node technology.

The circuits, which feature in the company's new "Core M" processors, are based on Intel’s second-generation tri-gate (also known as FinFET) transistor structure, which has seen the transistor gate pitch reduced from 90 nm to only 70 nm.

Intel’s US fabs in Oregon and Arizona are currently ramping up production of the latest chips, while a third in Ireland is scheduled to follow suit early next year.

ASML says that its EUV systems are in line to make a production debut in the manufacture of the next logic “node” of 10 nm, and it is expecting to deliver half a dozen of its next-generation NXE:3350B systems next year in preparation for that.

Wennink said: “We expect to ship around six NXE:3350B systems starting mid-2015, on top of the three NXE:3300B systems that will be converted to NXE:3350B configuration.”

Despite the positive noises, ASML’s stock price dropped slightly in early trading on the Euronext Amsterdam exchange shortly after the company’s quarterly update.