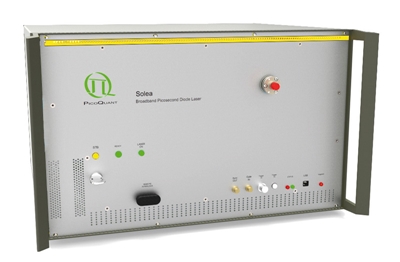 PicoQuant is deploying the technology in its new “Solea” range of supercontinuum lasers – the first of which will be on show at next month’s SPIE Photonics West trade exhibition.

The NKT patents licensed by PicoQuant include methods for drawing and processing the fibers for use in systems, and the deal also allows the supercontinuum light sources to feature a gain-switched laser diode.

Jakob Skov, CEO of the Danish firm, said in a company statement:

“Supercontinuum generation has been around since the sixties but it was not until we commercialized the SuperK sources, based on our patented nonlinear photonic crystal fibers, that supercontinuum lasers became a viable alternative to existing light sources.”

“Now, supercontinuum lasers are used in countless applications within bio[logical] imaging and optical characterization and we are happy to drive this change by giving companies around the world access to our technology.”

“We are extremely pleased to co-operate with NKT Photonics. We were looking for the perfect partner helping us to develop a freely triggerable supercontinuum laser. As the pioneers of this technology and the company with the broadest portfolio, NKT was a perfect choice.”

The first products to feature the NKT Photonics technology will be displayed on PicoQuant's booth at Photonics West, held in San Francisco February 4-6.