Developer of polymer inks for organic LED technology could be rescued by Solvay America acquisition. 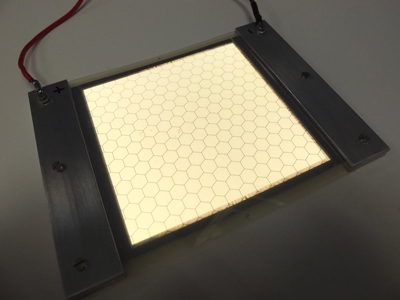 Plexronics, the venture-backed Pittsburgh company that is developing electronic inks designed for use in organic LED televisions and lighting applications, has filed a voluntary petition for Chapter 11 bankruptcy protection in the US.

The company has also worked on applications in organic solar cells, and is involved in development partnerships with the Netherlands-based Holst Centre on OLED lighting, and with Universal Display on key OLED materials.

Despite the bankruptcy application, Plextronics said that it had filed a series of customary motions to ensure the continuation of normal operations during the process, and stressed that its “Plexcore” products would remain available.

“Plextronics has secured financing during the sales process to ensure that it has sufficient liquidity to conduct its business uninterrupted,” it announced.

According to the company’s most recent filing with the US Securities and Exchange Commission (SEC), which dates from October 2013, Plextronics had been seeking to raise $5 million in debt-based securities. But at the time of that filing, only $572,000 had been raised.

Its voluntary bankruptcy petition, filed January 16 with the US Bankruptcy Court in Delaware, estimates that Plextronics has liabilities of between $10 million and $50 million. Listed creditors include the Holst Centre and the University of Pittsburgh’s Oxford Development Company.

Saved by Solvay?
However, Plextronics has also entered into an acquisition agreement with Solvay America, Inc., under which the latter – already one of Plextronics’ key investors with an equity share of more than 10 per cent - would act as a so-called "stalking horse" bidder.

Under those terms, the US subsidiary of the global chemicals giant would acquire the firm through an auction process supervised by the bankruptcy court that is designed to achieve the highest or best offer for Plextronics’ assets.

According to the proposed bidding procedures, any interested parties – including strategic and financial bidders - would need to submit binding offers to acquire Plextronics’ assets by the end of February.

If any bids are received an auction would then be held, followed by a final “sale approval” hearing. That would likely take place shortly after the auction, with the anticipated closing to occur by the end of March.

"The Board and management team have conducted a rigorous assessment of all of our strategic options and concluded that this process represents the best possible solution for Plextronics to help unlock the value of Plexcore inks," said Richard McCullough, the Plextronics chairman, in a company statement.

"We are committed to an outcome that maximizes value and allows Plexcore to remain commercially available to all customers. Further, we are thankful to our dedicated employees who continue to work vigorously to develop and provide Plexcore materials to all customers throughout this process."