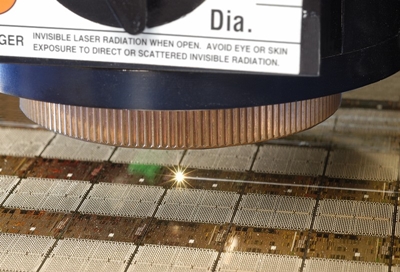 The thermal laser separation technology, known as ‘TLS-Dicing’, can be used to separate semiconductor wafers into individual chips, and has been transferred as part of an asset deal between the two firms.

As of January 1, 2014, the know-how, patents and development work carried out by Jenoptik's laser and materials processing business unit are now owned by Chemnitz-based 3D-Micromac.

3D-Micromac says that “immediate commercialization” of the technology is possible, and that the acquisition reinforces its know-how as a laser system provider in the semiconductor industry.

Laser dicing has been used for several years in the semiconductor industry, where it has certain advantages over manual scribing and dicing of wafers. The laser technique can be automated and although some problems were encountered initially, it has particular advantages for dicing brittle or hard materials like the sapphire and silicon carbide wafers now widely used in LED wafer production.

“A laser heats up the material locally and a cooling medium cools it down immediately afterwards,” explains 3D-Micromac. “The thermally induced mechanical stress leads to a complete cleaving of the wafer.”

It adds that compared to traditional technologies, laser separation generates clean, crack-free edges. Process speeds of up to 300 mm per second are possible, and generally speed up throughput in a manner that ought to help chip makers reduce their production costs.

Further development with Fraunhofer IISB
Tino Petsch, the CEO of 3D-Micromac, said in a company statement: “With ‘TLS-Dicing’ we obtain a technology that will perfectly complement our product portfolio in the semiconductor industry and enable us to expand our market position.”

“In addition to component processing at wafer level we can now also offer innovative solutions for separating of microchips,” Petsch continued. “In the coming months, we will continue to further develop the process in co-operation with the Fraunhofer IISB and implement it in industry-ready machine technology.”

Meanwhile the Jenoptik division that developed the technology will continue to focus on processing of plastics and metals for a wide range of applications such as for the automotive industry.

Dietmar Wagner, the general manager of Jenoptik Automatisierungstechnik, points out that Jenoptik's laser and materials processing division is increasingly focused on its core markets – into which the dicing technology did not really fit.

“We are pleased that with 3D-Micromac we have found a buyer for TLS-Dicing [that] wants to successfully commercialize the technology in the shortest possible time,” Wagner said.