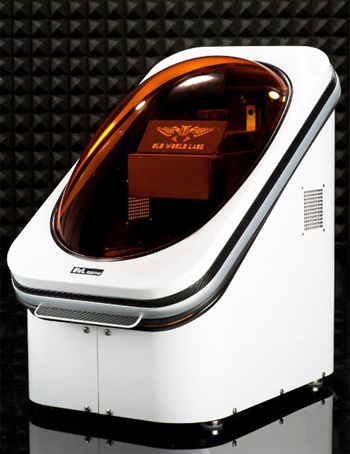 Old World Laboratories, Virginia Beach, Va, USA, has developed a new 3D printer, known as the OWL Nano, which offers "production resolution 100x thinner than other desktop 3D printers for under $5,000". The company says the device makes ultra-precision 3D printing an affordable tool for every designer or draftsperson, prosumers or dedicated hobbyists.

OWL Nano's resolution and accuracy stems from what the company calls next-generation stereolithography technology. Unlike other stereolithographic printers, which bounce a laser beam off mirrors before it reaches the object being printed, the OWL Nano positions its laser source just centimeters from the structure under development. This decreases beam distortion and allows the highly-tuned, single strand laser to focus on an area as small as 100 nm across.

Nicholas Liverman, partner, Old World Laboratories, commented, "Our new printer offers the accuracy and reliability of significantly more expensive, larger machines. So it's an ideal tool for anyone looking to create high-value, low-volume products or molds. If you can dream it, the OWL Nano can build it with incredible precision."

The device's inbuilt laser will maintain a precise, perpendicular position beneath the object it is forming, which creates a balanced 3D print. With greater efficiencies, the printer will operate quietly and fit into most workspaces. The manufacturer says that it also minimizes fumes – eliminating the need for additional room ventilation – and helps stabilize the operating temperature.

3D printing is used in distributed manufacturing and prototyping, and its applications include rapid manufacturing, tooling and molding (for example, creating a mold for a metal part). 3D printing can be faster, more precise and flexible, and less expensive when producing small-volume, high-value manufactured parts. There are other benefits, too, including printing interwoven structures.

There are three main approaches to 3D printing: stereolithography, fused deposition modeling and direct light projection. Old World Laboratories says that stereolithography is the "gold standard" in 3D printing; it uses a process that focuses a laser beam on the surface of a vat filled with liquid photopolymer resin. Layer by layer, a solid plastic piece is formed when the laser beam passes through the liquid resin. This is a more controlled process than fused deposition modeling and direct light projection, and it can from objects with much higher resolution using less energy. 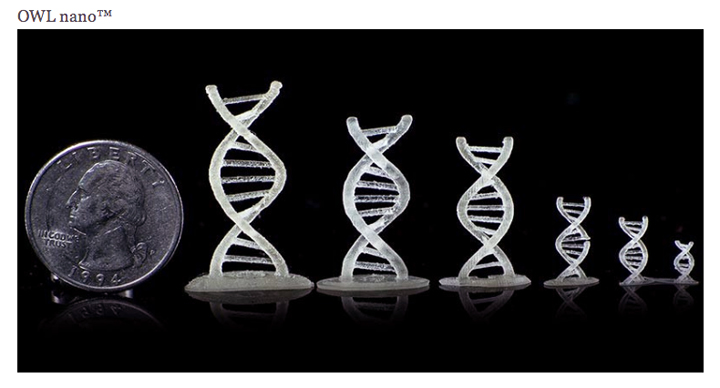 OWL Nano’s laser maintains a perpendicular position below the object it forms.