Finisar on target for billion-dollar sales

Photonic component and subsystem manufacturer Finisar has delivered an all-time record for revenues in its latest quarter, thanks to strong demand across the various optical communications sectors.

At $266.1 million, the Sunnyvale, California, company’s sales in the quarter that ended July 28 were up more than 20 percent compared with the same period last year. That strong bounce translated to a net income of $26 million – swinging from the net loss of $6.2 million posted a year ago.

“2013 is a significant year for Finisar,” Rawls told an investor conference call to discuss the latest results. “It is our 25th year of operation, and we will surpass one billion dollars in revenue for the first time in our current fiscal year.”

Finisar’s management team is expecting the record-breaking performance to continue through the current quarter, during which sales are forecast to be in the range $277 million to $292 million.

Data center ramp
The company is benefiting primarily from a sustained ramp in demand for optoelectronic products from data centers needing to handle increased internet traffic. That trend is distinct from what has been seen previously in the telecommunications part of the business, where demand tends to arrive in cycles as new networks are constructed.

With market analyst Infonetics estimating that there are now some 500,000 data centers in operation globally, Finisar and its competitors have a lot of customers with a demand for greater bandwidth. “It is an absolute fact that the optical content in data centers is growing,” said Rawls. “And that is a great opportunity.”

That trend should continue next year with the development of both single-mode and multi-mode modules offering a further 50 percent reduction in size and power requirements – both of which have become huge issues in data center operations in recent years. 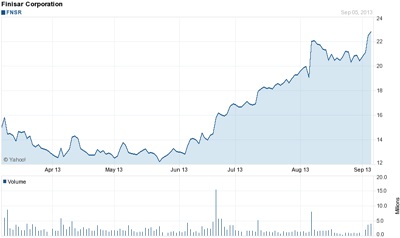 Rawls also pointed out another data center trend in Finisar’s favor – that they are becoming physically larger, and require an increasing number of longer, higher-speed connections. “This increases the optical content in data centers and creates more opportunities for Finisar products,” said the executive chairman.

• Investors shared the firm's optimism when trading opened on the Nasdaq exchange following the financial update, with stock in Finisar up around 5% in value. The company's value has now doubled since early summer, yielding a market capitalization of $2.25 billion in early trading on September 6.