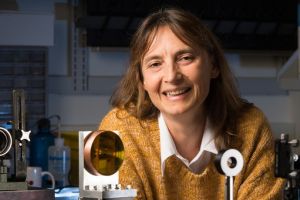 Jannick Rolland, director of the CeFO

Launched at the end of July 2013 under the auspices of the US National Science Foundation's Industry & University Cooperative Research Program (I/UCRC), the Center for Freeform Optics (CeFO) aims to foster knowledge and expertise in a field where there is currently no shortage of enthusiasm.

"Freeform optics is a hot term right now and you see people applying it everywhere, sometimes in cases where it actually makes little sense," commented Jannick Rolland, director of the CeFO, and also Brian J. Thompson Professor of Optical Engineering at the University of Rochester.

Clarifying the scope of the topic and tackling such ambiguities will be one part of the Center's agenda, as it brings together the University of Rochester, the University of North Carolina at Charlotte, and nine industrial partners. Providing a resource of engineers trained to exploit the technology to its fullest will be another long-term goal.

"Our top priority now is to get the Center going," said Rolland. "The NSF's I/UCRC program has a well established process for its Centers, getting graduate students involved in research projects that are of interest to both the academic and industrial sides. It is a very fluid collaboration."

The promise of freeform
As defined by the CeFO and its director, freeform optics concerns the development and application of lenses and mirrors whose surfaces are not limited to the classical descriptors of optical shape, and do not fall neatly into categories such as spheres, conics, or aspherics.

Instead, freeform structures are ones where the optical surfaces vary with the angular azimuth, instead of showing simply a radial dependence. The definition remains flexible though, with some wrinkles left to be ironed out.

"Clearly spherical optics and parabolas do not come under freeform optics, but anamorphics are a more borderline case and more debatable," commented Rolland. "We may decide down the line that some anamorphic shapes can be classed as freeform, otherwise the distinctions in the terminology may become too subtle to be readily appreciated by those using the technology."

However labeled, the appeal of freeform optics lies in the effects these structures can have on the wavefronts they create and the aberrations observed in the optical system. Exactly what the effects are varies depending on which freeform structures are involved, and whether they are placed within the aperture stop of an optical system or elsewhere. But correctly exploited, such structures could open up numerous applications.

One particular example could be the use of freeform optics to individually tune the optical aberrations created in off-axis optical systems, allowing designs previously constrained to essentially linear conformations to be folded into more compact non-linear arrangements. This off-axis capability, the ability for designers to move "from 1D to 3D" as Rolland describes it, will be one area where freeform technology can really be leveraged.

Other scenarios could see freeform optics exploited in medical imaging; cameras for remote sensing; and head-worn displays. There are plenty of non-imaging possibilities too, including illumination in both large- and small-scale applications. In each case the belief is that freeform optics can reduce the number of parts required, making for a compact and light-weight system, and free the system designers from some previously established design restrictions.

Doing so will first require understanding exactly what the effects on wavefronts and optical aberrations from freeform optics actually are, a fundamentally mathematical question. Although an applied field, the study of freeform optics has substantial theoretical and analytical branches, with new algorithms needed to understand the aberrations in the optical field, and new design principles are needed to exploit them.

In partnership
For all its current heat, freeform optics is not strictly a new concept. Progressive lenses used in ophthalmology are essentially freeform, although their structures are described by lower-order XY polynomials that differ from the mathematical functions being employed to create freeform optics today.

The viewfinder lens of the Polaroid SX70 camera, introduced in 1972, was another early case. But neither example was referred to by the term freeform, and both were essentially limited by the manufacturing capabilities of the day. 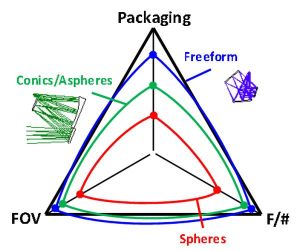 "Freeform optics has been around in some disguised forms, but modern advances in both fabrication processes and optical materials are making it possible to conceive and design freeform optical surfaces of much greater complexity," said Rolland.

"In the past, fabrication methods had to try and keep up with optical design. But now fabrication is ahead, and we are trying to catch up with the design mathematics and metrology. Just one weak link in the line from design to assembly will ensure that an optical product does not work, so we need all these different areas of expertise to work together, developing robust processes to build and validate these freeform systems."

The I/UCRC model should assist these goals, built as it is around industry-guided research projects and the involvement of graduate students. The intention will be that the industrial partners acquire solutions to some of the fundamental issues in freeform optics, and the students gain experience of industry needs across institutions.

As the Center develops, its success will lie in the students trained and the solid knowledge brought to the optical community. Although the current academic partners are US-based, as a result of the body's NSF funding, links to international academic centers and companies could also become a feature of the Center's work in the future, befitting its broad remit.

"The key benefit of the Center is intended to be the partnership it creates between academia and industry, coordinating the intellectual thinking and research across both sides, so we can advance much faster than if everyone does their own thing," commented Rolland. "That's the mission."