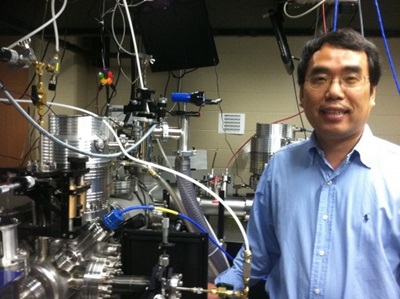 The team behind the world’s shortest-pulse laser is to head up a $6.9 million project to investigate potential applications of attosecond pulses of light.

Defense applications
Ultimately, thinks DARPA, the work could lead to applications in defense such as navigation and communications.

“By generating and engineering waves in the optical domain, where engineers already exercise exquisite stability and control, these waveforms may be down or up-converted to the desired wavelength,” says DARPA in its project brief.

UCF’s Zenghu Chang, whose team last year produced a laser with a record-breaking pulse of just 67 attoseconds in duration, will lead the project work.

Quoted in a UCF release, Chang said: “There have been a lot of new discoveries made in attosecond lasers in the last 12 years. Now an opportunity has arrived to do something that has previously only been done in principle.”

The first stage of the project will focus on building a new femtosecond laser capable of producing higher energy pulses to drive the process of attosecond pulse generation. That laser will be housed in a 2400 square-foot space at UCF.

The facility should help the US to compete with research developments that could result from the European Extreme Light Infrastructure (ELI) project – although the latter enjoys substantially more funding.

Attosecond physics
The attosecond pulses give scientists a new tool to view quantum mechanics in action – potentially enabling physicists to monitor some of fastest physical processes in the natural world, such as the motion of electrons and chemical reactions.

Although Chang and his team’s work on the subject has produced record-breaking results, the intensity of the attosecond pulses remains extremely weak.

Last year, Chang told optics.org about plans for future work: "The priority is to increase the attosecond pulse energy," he said. "At the present time, isolated attosecond pulses are so weak (nanojoules) that we have to combine them with strong femtosecond lasers to observe electron dynamics."

Chang’s approach uses a “double optical grating” technique, and he believes that it will be possible to generate isolated attosecond pulses that are intense enough for conducting true attosecond pump/probe experiments in the future.

Meanwhile, UCF said recently that it is creating an Institute for the Frontier of Attosecond Science and Technology (FAST), which will be directed by Chang.

It is designed to allow researchers from the Department of Physics and UCF’s renowned College of Optics & Photonics/Center for Research and Education in Optics and Lasers (CREOL) to work closely together and compete for cutting-edge projects such as the DARPA PULSE program.

“Attosecond science is addressing problems that are more and more complex,” said Chang. “By establishing an institute for collaborative research on attosecond science we create the potential for major breakthroughs in our understanding of the role of ultrafast electron dynamics.”