Kepler: the search goes on

Hunt for exoplanets continues as SETI’s Jon Jenkins seeks a new purpose for the faulty but 'exquisite' telescope. 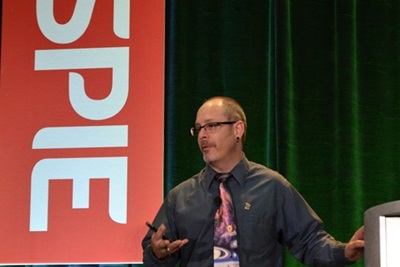 by Ford Burkhart in San Diego
The future of NASA’s phenomenal Kepler space observatory, launched in March 2009 but now troubled by a faulty pointing mechanism, is up for grabs.

"It’s still a perfectly good telescope," said Jon Jenkins, a senior scientist at SETI, the California based institute for the search for extraterrestrial intelligence. But in a plenary talk at SPIE’s Optics and Photonics symposium in San Diego, he added that Kepler needs a new purpose beyond hunting for Earth-like planets where intelligent life could exist.

Jenkins is soliciting ideas for what the telescope might do next, and said suggestions for the repurposing are due September 3.

When new, Kepler carried the largest array of CCDs ever launched and sent back a huge amount of data, based on capturing tiny - previously invisible - changes in light intensity as exoplanets passed in front of their suns. Thus it helped discover hundreds of exoplanets and thousands of candidates yet to be confirmed.

So are we alone? That remains the overriding question at SETI, and we still don’t know if there’s intelligent life out there, Jenkins said, even after his 20 years of digging through oceans of data.

But thanks to the now-ended Kepler Mission, we know a lot more today about planets that could support intelligent life, said Jenkins, who is based at NASA’s Ames Research Center.

He briefed a near-capacity audience on the opening day of the annual symposium at the San Diego Convention Center, one of two back-to-back stunning space-related lectures.

Worn-out parts
Even though the Kepler observatory’s key parts that provided its stability have worn out, leaving it unable to continue its work of four years of meticulous photometric data collection on 190,000 stars, the search will go on, Jenkins said.

We owe Kepler a lot, he said. “If you look at the night sky on a summer nights, and wonder if there are intelligent beings in those stars, now you know most of those stars have planets – we didn’t know that before Kepler.”

“Are there campfires on those planets around which other beings are roasting marshmallows?” he said. “We don’t know; but at least we know the planets are there.”

Finding these planets, which are too dim and too small to have been observed until Kepler, is what Jenkins called the “bottom up” part of the search. Using the transit method, Kepler could achieve a precision of near 20 ppm over 6.5 hours of observations. It observed transit events, when a planet would cross in front of its star, with the associated dip in brightness revealing the nature of the planet.

“We must learn what kinds of planets are out there. Then we can build up to an understanding that there is life on these planets” he said. “We are decades away from that sort of bottom-up knowledge.”

Biosignatures
The “top down” part of the search is trying to identify “biosignatures” that might appear in artificial radio or optical signals from the universe that suggest intelligent life. SETI, Jenkins said, is doing both.

The search for exoplanets - distant Earth-size planets in a “habitable zone” orbiting Sun-like stars, and where liquid water could exist - remains a high priority for NASA, he added.

Recalling the start of his work, back in 1993, Jenkins said, “We didn’t know of any exoplanets. Our state of knowledge was zero. Now we have about 800 known planets, and we have about 3,500 candidate planets.”

“Many are very small, smaller than Earth. About 50 are in the habitable zone.” That means they are rocky, with a liquid ocean and just the right distance from their suns. If they are too close, they are too hot for life; the ocean would boil off. If too far, the ocean would freeze, and there would be no liquid to support life. So the habitable zone is between the orbit of the very hot Venus out to the orbit of chilly Mars.

Exquisite machine
Kepler, Jenkins said, was exquisite. “It is like a Mercedes Benz which had one tire blown out, and we’ve already used our spare. There’s nothing wrong with it. We just can’t drive it. We can’t point it as it must be pointed.”

Kepler was designed to run for six years, and operated well for four. It needed three operating reaction wheels to keep on point, and maintain its position in space. It lost one in 2012, and lost its spare in May this year.

“It is still a phenomenally exquisite photometric machine,” Jenkins said. “But it relies on precise pointing. It had been the equal of the Hubble in its ability to keep an image stable. We would point, observe for a month, then download data and continue.”

Thanks to Kepler, Jenkins said, we now know that nature loves to make planetary systems.

“The galaxy is brimming with planets,” he said. “Each star has at least one planet, and many have more than one. We used to think we in our solar system were pretty special, with our planets - or pretty weird. Not so.”