Laser markets keep on an even keel 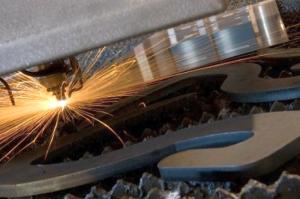 The fortunes of US laser vendors during the second quarter of 2013 remained broadly in line with expectations, according to the latest market survey from Longbow Research, Ohio.

Responses to Longbow's inquiries indicated that most vendors experienced year-on-year growth in low single digits, with business conditions failing to offer up any drastic surprises, pro or con. Vendors reporting any sluggishness attributed it to normal seasonal patterns.

Mark Douglass of Longbow said that 59 percent of respondents had seen a year-on-year increase in business in 2Q 2013, an improvement over the 44 percent who could say the same in the first quarter.

Twenty six percent indicated that business was down year-on-year, a worse result than the 22 percent feeling that way in the previous quarter. The number reporting flat business conditions duly shrank considerably, from 33 percent in 1Q 2013 to 15 percent in the latest survey.

"Markets seem relatively stable across the board and roughly in line with expectations," said Douglass in the second-quarter survey. "While some vendors are expressing hope for an acceleration in the second half of the year, there is little evidence that demand will pick up meaningfully."

Longbow detected some potential for pent-up demand in the US manufacturing sector, but predicts that Europe is likely to stay sluggish.

The Purchasing Managers' Index (PMI), a broad indicator of economic health, reflected these regional nuances. US PMI inched upwards in June 2013, rising to 50.9 from the 49.0 posted in the previous month, and indicating a modest switch from economic contraction to expansion. European PMI improved to 48.8 from 48.3, while China worsened from 49.2 to 48.2 for the same periods.

Fiber laser growth
As in previous surveys, Longbow found fiber lasers continuing to steal market share from traditional sources, although the rate at which this switch is taking place is fluctuating.

During the second quarter the move towards fiber lasers appeared to Longbow to have reached a steady state, or even slowed a little. But IPG's recent financial results for the quarter ended June 30th revealed, among other things, growth of 54 percent in China - a figure Douglass described as "jaw dropping."

The figures comfortably confirm the company's place as the established market leader in the fiber-laser business, a position built on an aggressive pricing policy designed to bruise any contenders for the position.

"IPG pricing remains very formidable and I am not sure anyone but Trumpf has been able to keep pace, Trumpf being the only other company with established manufacturing scale on laser diodes," noted Douglass. "Coherent also has decent scale, but it is such a new player that their pricing position is not yet known, and they are going after the higher power business of 1 kW and above. IPG's significant price drops seem to be primarily on the low-power pulsed sources."

Alongside pricing tactics, IPG has also made a clutch of significant business moves in recent months, including the acquisitions of JPSA Laser in September 2012, and Mobius Photonics in March 2013. A move into systems makes sense for IPG as a means to find new avenues for sales growth and forge a closer connection to end users, although coming from a company in IPG's position it has understandably caught the attention of existing OEMs.

"Some OEMs are skeptical of IPG's motives, but are for the most part going along since IPG is well known; has a good track record; and can deliver quickly. And it has the best prices around," Douglass commented. "Options outside of IPG are pretty limited at present."

Change of fortunes
Longbow's data show that the battle for market share between IPG and Rofin-Sinar has swung decisively in favor of the former company in recent quarters. IPG has grown its materials processing business at a faster pace than Rofin in every quarter since early 2010, enjoying annual growth of around 40 percent compared to Rofin's nine percent.

"I think it was simply IPG getting scale faster than anticipated, and taking advantage of the chance to accelerate its volumes," he said. "Rofin was caught flat-footed, probably surprised by the price drops and volume gains by IPG. But I am not sure how it could have reacted faster, since it was already investing in fiber laser R&D and acquiring businesses to help it put together a fiber laser platform."

Earlier this year Rofin announced an increase in quarterly sales but sluggish revenues, dragged back by delayed shipments and ongoing logistical difficulties with its new diode laser packages for high-power fiber lasers.

"There have been missteps this year in getting its high-power diode lasers into production via a third party, which makes it that much more challenging for Rofin, but I think it can turn things around and get some traction," commented Douglass. "I by no means view Rofin or anyone else as an 'IPG slayer', but it should be able to fight for share in 2014 and find some growth."

Tim Hayes is a contributing editor to Optics.org