New network of experts looks to advance the emerging field of freeform optics through industry/university partnership. 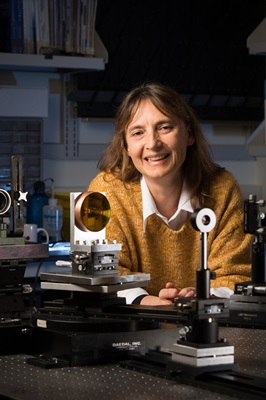 The development of so-called “freeform optics”, devices with potential applications in head-up displays, LED lighting, remote sensing and astronomy, has received a major funding boost in the US.

A new multidisciplinary center headed up by experts in the emerging technology at the University of Rochester in New York has just landed $4 million through a combination of federal, academic and industry support.

Rochester will join forces with the University of North Carolina at Charlotte (UNCC) and industry partners - including Ball Aerospace and Schott North America - in a bid to take the technology out of the laboratory and make it commercially viable.

Jannick Rolland, the Brian J. Thompson Professor of Optical Engineering at Rochester, has been appointed as the director of the Center for Freeform Optics (CeFO). She said in a statement:

“Freeform optics research is applied research and is best done in collaboration with industry – the new center will make this possible.”

The professor also stressed the role that the center will play in educating optics graduate students, adding: “Innovation in this area will require industry to have well-trained employees who can understand the fundamental research and also how to apply it.”

Rochester academics have pioneered the theory behind the freeform approach to optics, developing an understanding of how such surfaces guide light in three dimensions.

Together with fabrication and metrology expertise, this will constitute the main focus of the center, whose stated vision is to create “compact, affordable and performant [sic] optical systems that permeate precision technologies of the future”.

Aside from optics, the center will draw upon expertise in mathematics, materials science and instrument design to support what is considered “pre-competitive” research – that is, applied research that is not yet ready for a commercial launch.

Pioneering role
Robert Clark, senior vice president for research and dean of the Hajim School of Engineering and Applied Sciences at Rochester, said: “Jannick is ideally suited to lead the new center for freeform optics, which brings university and industrial researchers together to ultimately advance manufacturing.”

He added: “The Institute of Optics at the University of Rochester has served a pioneering role in optics for nearly a century, and Jannick builds upon the university's strengths and that of the local region in advancing our mission to serve as an international leader in this ever growing field.”

CeFO brings together the two universities with no fewer than nine partners from industry and US national laboratories. A five-year grant from the National Science Foundation’s Industry/University Cooperative Research Centers Program starting August 1 will provide seed funding, while the nine partners are each contributing $48,000 towards the collaboration.

The collaborators say: “The goals of the center include advancing freeform optics research as a basis for innovation, demonstrating the innovation for state-of-the-art optical systems and educating the next generation workforce, which is critical to industry.”

The collaborating partners are:

Said to have first emerged as an idea at a 50-strong “incubator meeting” in freeform optics that took place back in November 2011, CeFO will include eight faculty members from Rochester.

Aside from Rolland, the CeFO team includes associate director John Lambropoulos, Miguel Alonso and Jim Fienup – all from Rochester’s Institute of Optics – as well as Stephen Burns and Jon Ellis from the university’s mechanical engineering department, Stephen Jacobs from the Laboratory for Laser Energetics, and visiting scientist Kevin Thompson from the company Synopsys.

UNCC will provide a team of six, led by optics specialist Angela Davies and mechanical engineer Christopher Evans. Joined by Matt Davies, Brigid Mullany, Tom Suleski and Glenn Boreman, they will focus on fabrication and metrology of new types of optical devices that could feature textured and segmented surfaces, for example imitating the compound eyes of insects.

In an interview with optics.org last year, Zygo’s John Stack said that the company was looking at freeform optics for potential application in head-up displays, while just a couple of months ago the UK firm PowerPhotonic said that it was launching "the world’s first low-cost freeform micro-optics rapid fabrication service".

Congresswoman Louise M. Slaughter, who represents the Rochester region, said: “I am delighted that Rochester will be home to the Center for Freeform Optics. Our area has the rich history and unique academic and industry resources that truly define us as a world leader in optics, and the establishment of this center is just the next step in our efforts to advance the optics industry in Rochester.”