UK team in sight of early test for AMD, the developed world’s leading cause of blindness. 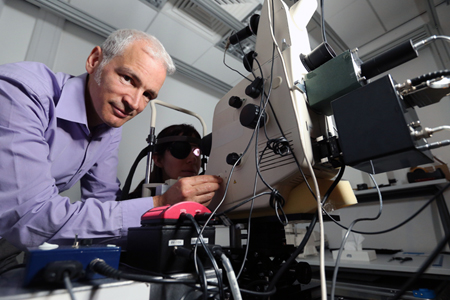 Dr Tom Margrain with his retinal densitometer at Cardiff University.

Engineers used to designing instruments for astronomical telescopes are now applying their expertise to the development of a diagnostic test for Age-Related Macular Degeneration (AMD), the developed world’s most common form of sight loss in adults.

In the US, there are more than 10 million already living with AMD – more than all cancer patients combined and twice as many as people with Alzheimer's disease. And in the UK alone, by 2020 the number of AMD sufferers is expected to rise to 750,000. Currently more than 1% of over 60s suffer from some sort of AMD.

Engineers at the UK Astronomy Technology Centre, part of the Science and Technology Facilities Council are currently collaborating with scientists from Cardiff University’s School of Optometry and Vision Sciences to develop a “retinal densitometer”, which can pick up the earliest stages of AMD by measuring, in the minutest of detail, how the eye responds to light.

This project was funded by the UK’s National Institute for Health Research’s Invention for Innovation program and also by STFC, which was responsible for setting up the collaboration between Cardiff University and STFC.

Dr Dave Melotte, Innovation Manager at the UK ATC commented: “Astronomy technology and vision science might seem poles apart but put the right experts together and they are able to achieve things that would be impossible by either group in isolation.”

AMD affects a small part of the retina at the back of the eye, the macula, which is used to see detail and colour. One of the earliest signs of AMD is a change in the way that the light sensitive pigments in the macula regenerate after exposure to light. The densitometer can assess this change by measuring, over time, the very small changes in the amount of light reflected by the retina after exposure to light.

Until very recently there have been few treatment options available for AMD, but some treatments to delay developments of early forms of the disease, and to manage it, are now being developed. Early diagnosis is the one of the most crucial factors for developing new treatments and improving the management of this disease, but previous attempts at early detection techniques have been limited by the performance of the measurement technology. 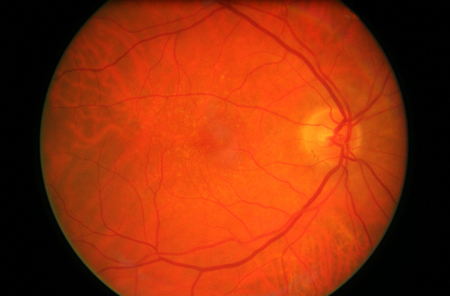 Treatment in sight? In the US, there are more than 10 million already living with AMD.

The Retinal Densitometer works by measuring the way the eye “dark adapts” after exposure to a bright light. It has advantages when compared to existing detection techniques in terms of its sensitivity and ability to measure responses to light from different parts of the retina; it is also completely non-invasive.

Cardiff University’s Dr Tom Margrain, told optics.org, “Ten years ago, there were no real treatments for AMD so there was little support for this type of early disease detection technology. I think the grant awarding bodies might have questioned the value of developing a technology when there was no treatment for the disease being detected.

”The operating details are that we scan across the range 450-700nm – the visible range – and at very low powers; if power is too high then it affects reaction and performance of pigments.

”The camera sends out a timing pulse to synchronize all aspects of the system including the wavelength and intensity of light reaching the eye. The resultant is a video timeline of how the eye responds to different wavelengths. We use this to extract a spectral signature of how the eye responds to different wavelengths over time and space. This signature reflects the quantities of visual pigments, allowing us to work out how they change over time. In people with AMD they change is much slower.

Early tests already carried out by the project team on 10 patients with early stage AMD and 10 controls, have shown that the light changes on the macula can be highly accurately measured using this patented technology, and that it has a high ability to distinguish between affected and non-affected groups.

“The benefits to patients here are huge, but the benefit is not just societal, it is also economic. We may be living longer but this in turn increases the pressure on healthcare services. Our next steps will now be to get the densitometer ready for official clinical testing and then to take this through to full commercialization. Ultimately our densitometer could be used in any optician’s clinic.”

Margrain explained why there has recently been significant progress in the treatment and understanding of AMD: “Over the past year or so, early approaches to treating AMD have become a significant research area, as have the tools to perform such analysis so the research agenda has shifted. Also, sometimes it takes an interaction between two different disciplines, in this case ophthalmology and space technologists to solve the problem. There is a lot of common ground between astronomy and ophthalmology.

”We have registered a detailed patent to protect this work, and over the next few years we are planning to develop the technology further . We aim to produce a commercial device. We will also be running clinical trials on a large sample of patients in order to develop a clinical-ready device. At the moment there are no commercial partners involved although there has been a lot of interest from companies working in this field.”