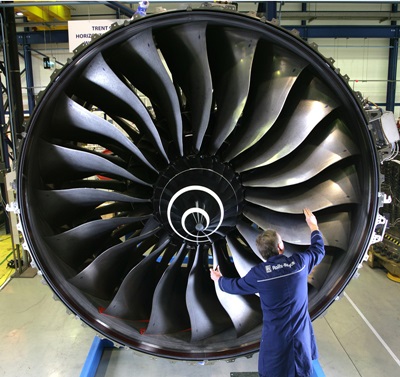 Rolls-Royce has extended its use of laser peening technology in the manufacture of its jet engines, with the addition of a new production cell at its site in Singapore.

Curtiss-Wright Corporation, the US firm that established and now operates the cell, says that the facility is already up and running, and processing the “wide chord” fan blades that are used in Rolls-Royce’s “Trent” aero engines.

The technology is based on a neodymium glass laser, and was originally developed in conjunction with Lawrence Livermore National Laboratory (LLNL) in California. A much more powerful version of the Nd: glass laser is used in the National Ignition Facility (NIF), which is also based at LLNL.

According to Curtiss-Wright, the peening mechanism is able to impart deep compressive stresses on the surface of metal parts, which can then be used to minimize the maintenance and inspection interval of the critical components.

The company already operates laser peening facilities in Livermore, as well as Earby in the UK, Frederickson, WA and Palmdale, CA, and also has mobile laser peening systems that can be transported to sites anywhere in the world.

In the peening process, high-energy laser pulses are fired at the surface of a metal part, generating pressures of one million pounds per square inch. Multiple firings of the laser in a pre-defined surface pattern impart deep levels of compressive stress that are said to provide greater resistance to potential fatigue and corrosion failures.

The approach, first mooted in the 1960s but only becoming commercially feasible more recently, has found increasing use in aerospace applications over the past decade.

"We are very pleased to be providing Rolls-Royce with our state-of-the-art laser peening technology for their most advanced commercial engine designs," said Martin R. Benante, the CEO of Curtiss-Wright, in a statement.

"This award is a significant milestone in continuing to expand our proprietary laser peening technology globally. A number of industry leaders, such as Boeing and Siemens, have also recognized the benefits of this unique and highly technical offering."

Trent engine family
The Rolls-Royce Trent engine design is widely used in commercial aircraft, including the latest designs such as Boeing’s 787 Dreamliner, as well as the Airbus A350 and A380.

The manufacturing facility is the company’s first outside the UK to make the hollow titanium wide chord fan blades (WCFBs) that are used in the Trent engines, and at full capacity the Singapore site will produce over 6,000 blades per year.

Trent engines came under worldwide scrutiny back in November 2010, when one of four powering a Qantas A380 flight bound for Sydney exploded shortly after take-off from Singapore, damaging parts of the aircraft’s wing, fuselage and control systems in the process.

Last month, the Australian Transport Safety Bureau reported that the incident was caused by a leak from an oil pipe on the failed Trent 900 engine. Rolls-Royce said that the oil pipe was one of a small number that had been incorrectly manufactured as a result of a measurement error during a precision drilling procedure.

The oil leak led to a fire in the engine and the break-up of a turbine disc, fragments of which exited the engine – an incident known in the aviation industry as an uncontained disc failure. The aircraft returned to Singapore and landed safely, and although such failures are extremely rare (the previous such failure on a large Rolls-Royce civil engine happened in 1994), the company has implemented a number of changes to its design and manufacturing processes as a result.