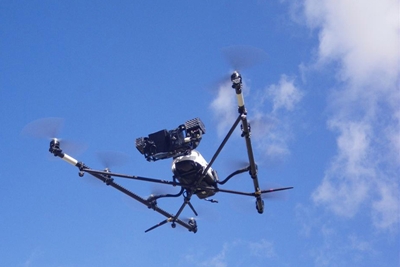 On the fly: drone spectroscopy

Unmanned aerial vehicles (UAVs), or drones, might be best known for their controversial deployment in war zones such as Afghanistan, but in combination with some compact spectrometers, the technology is also now being used to check the health of crops in New Zealand.

A pair of Ocean Optics miniature spectrometers – one flown on the UAV and a second deployed in a ground unit – are helping plant scientists to monitor barley and sugar beet crops by providing hyperspectral measurements.

According to the Florida-based spectroscopy company, its lightweight STS model has flown initial experiments at altitudes of up to 200 meters. The airborne unit gathers high-resolution reflectance spectra, with irradiance monitored by the ground unit.

According to team leader Andreas Burkart, from the Research Center Jülich in Germany, collecting hyperspectral data by conventional field spectroscopy is a time-consuming task and is usually restricted to easily accessible areas.

In stark contrast, the UAV-deployed spectrometer is able to deliver fast and reproducible measurements over any terrain, whether farmland, forest or marsh. By measuring various segments across a section of the New Zealand pastureland, the system has been able to assess specific plots with live vegetation.

The lightweight nature of the tool is critical: employing a CMOS light sensor, the STS spectrometer measures just 40 mm x 42 mm, and weighs only 68 grams. Despite those tiny dimensions, Ocean says that it can provide full spectral analysis with low stray light, a high signal-to-noise ratio and excellent optical resolution.

Ocean claims: “For the application described here, the researchers were able to match the performance of the STS to that of a larger, more expensive commercially available field portable spectrometer, with optical resolution of approximately 2.5 nm (full-width, half-maximum).”

The tiny spectrometer is available in two wavelength ranges, in the form of visible (350-800 nm) and near-infrared (650-1100 nm) options, with Ocean saying that it is particularly suited to high-intensity applications such as LED characterization and absorbance or transmission measurements.