Analyst: PV to provide 2% of global electricity supply by 2018 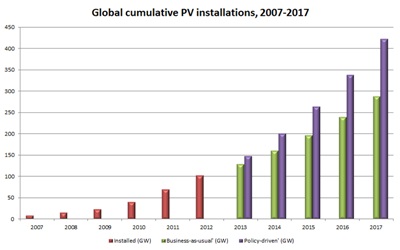 With high-profile bankruptcies, shrinking subsidies and a multilateral trade dispute, now might not seem to be the best of times for the photovoltaics (PV) industry.

But analysts at Lux Research are urging those still active in the PV sector to act now in order to ensure that they can benefit from an installations market that they expect to grow at a compound rate of more than 10% over the next five years.

Matt Feinstein and Ed Cahill calculate that, in 2018, some 61 GW of PV capacity (at peak output) will be plugged into electricity grids around the world. According to the latest installment of the highly respected European Photovoltaics Industry Association (EPIA) industry report, the 2012 figure for installations was 31 GW. The EPIA is anticipating that installations will grow to anywhere between 48 GW and 84 GW in 2017 – depending on the specific nature of energy policies adopted.

As a result of that growth, the Lux analysts believe that the proportion of the global electricity supply provided by PV will more than quadruple from the current level of around 0.5% to above 2% in 2018.

Supply and demand in synch by 2015
Crucially for the industry, Lux believes that the balance between supply and demand, which has been skewed massively in recent years by largely Chinese capacity growth, will return to a healthy balance as early as 2015.

That should see module prices remain relatively stable compared with recent years, and enable those companies that have survived the industry shake-out to deliver reasonable profit margins instead of being forced to sell at below-cost levels to remain competitive in the current oversupplied market.

In a webinar presentation last month, Lux’s Feinstein said that while the level of module supply in 2013 remains nearly double that of global demand, that excess will fall to around 50% next year and to less than 20% by 2015 – at which point supply and demand would be at sustainable levels.

As the analyst pointed out, 2015 is now just 18 months away, meaning that those looking to enter the PV space must act quickly to ensure that they can benefit from what ought to become a resurgent and healthy market.

And despite the dominance of Chinese suppliers at the module level, he believes that there remain plenty of business opportunities. Feinstein says that intervention by the Chinese government at both national and regional level has seen module capacity expansion plans frozen, and that much redundant crystalline silicon capacity will be shut down.

Moreover, he is expecting Chinese companies to place far more emphasis on technology innovation over the coming years. “The government is setting initiatives and rules for [Chinese] companies to access the solar market beyond 2015,” the analyst said. “Only the biggest and the best will remain and technological prowess will be key.”

Dispute resolution?
Regarding the trade dispute with the European Union, Feinstein does not believe that European manufacturers will gain much from the spat. He is expecting a deal to be reached before the year is out, and that Chinese companies will in any case be able to skirt around the tariffs by building new factories in Turkey to supply Europe.

As far as non-silicon PV technologies are concerned, the Lux team sees a strong future for the top-tier manufacturers of thin-film copper indium gallium diselenide (CIGS) cells, citing firms such as TSMC Solar and Japan’s Solar Frontier as front-runners.

On the other hand Lux says that flexible PV will remain a niche play unless the conversion efficiencies of technologies such as organic PV can be both raised significantly, and maintained in volume production.

While PV could provide around 2% of global electricity within five years, that figure will be far higher in locations with reliable solar resource – so in places such as Greece and Arizona, the proportion could reach 15%. But Lux adds that until a suitably cheap storage technology can be developed, the intermittency of PV means that this is likely to remain the upper limit.