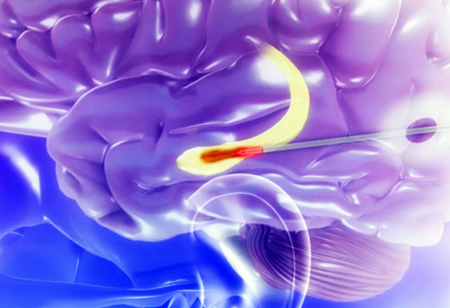 A minimally invasive laser-based tool for epilepsy surgery offers a quicker recuperation time for patients than major surgery, Mayo Clinic researchers report. The research is ongoing, but preliminary results were recently presented at the American Academy of Neurology.

For more than 50 years, the standard effective treatment for medication-resistant epileptic seizures has been brain surgery. Neurosurgeons remove a small circle of the skull and probe into the brain to cut out or isolate the area where seizures are occurring.

The operation, known as a temporal lobectomy, is effective in up to 80 percent of patients when the seizures are localized. However, the recuperation period can be lengthy, involving several days in the hospital and one to three months for the patient to return to ordinary activities.

Although approximately 14 patients (eight in Rochester, six in Jacksonville) have undergone this treatment to date, the research team reported positive preliminary results on their first five patients in Rochester — all of whom had epilepsy involving highly localized seizures occurring in the hippocampus. The most dramatic difference was the recuperation time: Patients required only one night in the hospital and were back to their daily activities in a week. 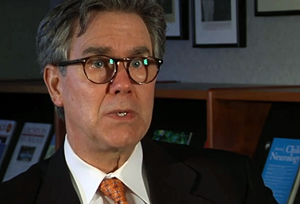 In an MRI-equipped suite, patients were placed under general anesthesia in a stereotactic frame. Creating a small burr hole in the back of the skull, researchers directed the laser-tipped catheter to the hippocampus to burn a tiny lesion at the site of the seizures. An intraoperative MRI scan verified the location and another MRI scan after the procedure confirmed the extent of the lesion.

In three patients with a type of epilepsy called mesial temporal sclerosis, who were averaging 64 seizures a month, two patients were seizure-free several months after surgery and one had experienced only brief auras (a warning feeling before a seizure). In two patients with the localized epilepsy syndrome hypothalamic hamartoma, who had averaged 41 seizures a month, the procedure also provided improvement; one experienced three partial seizures and one had a 50 percent reduction of overall seizures in the months after the procedure.

Researchers will continue to follow patients for the next year with neuropsychological tests and MRI scans, investigating memory and other effects of this approach compared to temporal lobectomy. "We are pleased by the outcome of our colleague's research and are seeing similar results among our patients," says Jerry Shih, M.D., neurologist on Mayo's Florida campus. "We are excited to be able to also offer this technique to patients, including those who were previously told they were not candidates for traditional surgery."

As a handful of medical centers around the country begin to use the Food and Drug Administration-approved technology (designed by the company Visualase), they will carefully study select patients with localized epilepsy conditions to verify the benefit of laser ablation. The technique ultimately may apply to other types of seizures.

"As we continue to refine the technique and are able to ablate a larger area, I believe we may be able to make the approach as effective as open surgery," Dr. Marsh adds. He speaks further on the subject in the following video: