“Lab coats for lasers” have been developed under a European project entitled PROSYS. 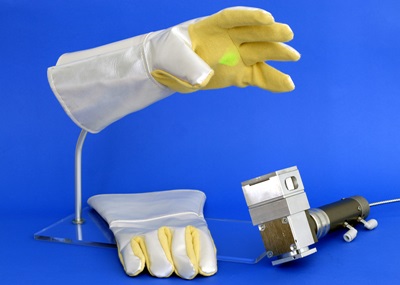 A European Commission-funded project led by Laser Zentrum Hannover (LZH) in Germany is expected to see new types of protective clothes for laser operators, including jackets, trousers, aprons and gloves, on the market soon.

Incorporating both passive and active systems, the clothing is set to offer effective protection against laser radiation with an output density of up to 20 MW per square meter.

While protective professional clothing is common in other industries, most obviously in firefighters’ heat- and flame-resistant suits, or the laboratory coats worn by chemists, there is no standard equivalent for laser users – aside from protective eyewear.

Now, researchers in a consortium led by LZH have designed two types of protective garment. First is a passive system based on multi-layered textiles. They feature a top layer with a special coating to diffusely reflect as much laser radiation as possible.

Any radiation that does penetrate this top layer is then “spread out” by a highly scattering middle layer, and if any residual heat is able to pass through these reflective and scattering layers it meets a thermally insulating inner layer that allows a small amount of energy to pass through to trigger a sensation of pain.

Michael Hustedt, the head of LZH’s safety group and coordinator of PROSYS, explained: “This is intentional. Users should notice that they are being exposed to hazardous radiation, so they have the chance to withdraw their hand or arm.”

Since a typical reaction time for an operator would be up to four seconds, the passive system should protect users against output densities of up to 900 kW/m2, making such protective clothing some twenty times more effective than anything presently available on the market.

Interaction zone
LZH points out that because of the increasing number of cutting and welding applications that use hand-guided laser systems, operators are often positioned next to the interaction zone between the laser beam and the target materials.

With high laser powers lasers in use, especially at times when reflective surfaces are being processsed, the beam can pose a real hazard, and would cause severe burns if it was deflected onto unprotected skin.

Moreover, since skin is transparent at near-infrared wavelengths – precisely the range in which many high-power solid-state lasers operate – that radiation could penetrate much deeper, perhaps damaging blood vessels or other tissues.

The team in Hannover is a therefore working on an “active” system too, in which sensors are embedded in the different layers of the protective clothes. If any sensors are damaged by a high-power beam, they send an automatic shut-off signal to the laser in less than 100 milliseconds.

Complete shut-down of the laser would take approximately 80 milliseconds, meaning that the active system should offer protection against even higher output densities of up to 20 MW/m2.

The PROSYS consortium, which includes three European research institutes, nine SMEs and one large company, has now developed prototypes of the protective clothing, showing them off at this year’s Hannover Messe and LASER World of Photonics events. “Plans are being made for launching the products on the market soon,” says LZH.

In the meantime, further developmental work – mostly to make the active systems more robust and flexible – are ongoing. Practical tests in a real industrial laser setting are to focus on reducing the weight of the material used and improving the flexibility of protective gloves.