Such technology could be used for solid state lighting, full color displays, and sources for fluorescence bio and chemical detection. 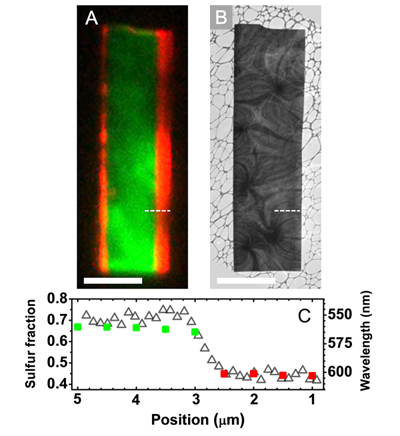 A new semiconductor device that can emit two distinct colours has been created by a group of researchers at Arizona State University, AZ, US, who say it opens up the possibility of using LEDs universally for cheaper, more efficient lighting.

The proof-of-concept device, which was first published in IOP Publishing’s journal Semiconductor Science and Technology, takes advantage of the latest nano-scale materials and processes to emit green and red light separated by a wavelength of 97nm — a significantly larger bandwidth than a traditional semiconductor.

The device is more energy efficient than traditional LEDs because the two wavelengths are emitted as lasers, with sharp and specific spectral lines that are narrower than a fraction of a nanometer. This may be compared to LEDs that emit colours across a broader bandwidth. One of the main properties of semiconductors is that they emit light in a certain wavelength range, which has resulted in their widespread use in LEDs.

The bandwidth of a given semiconductor is typically limited to a few tens of nanometers. But for many applications such as lighting and illumination, the wavelength range needs to be over the entire visible spectrum and thus have a bandwidth of 300nm (from blue to red).

Single semiconductor devices cannot emit across the entire visible spectrum so they need to be combined to cover the entire range. This is expensive and is, to a large extent, the reason why semiconductor LEDs are not yet used universally for lighting.   In this study, the researchers, from Arizona State University, used a process known as chemical vapour deposition to create a 41µm-long nanosheet made from CdS and CdSe powders on silicon substrates. 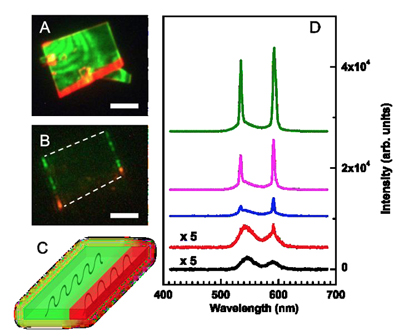 However, recent developments in nanotechnology mean that structures such as nanowires, nanobelts and nanosheets can be grown to tolerate much larger mismatches of lattice structures, and thus allow different semiconductors to be grown together without too many defects.

Ning added, “Multicolor light emission from a single nanowire or nanobelt has been achieved before but what is important in our work is that we have developed lasers at two distinct wavelengths. To physically put together several separate lasers of different colors is too costly to be useful and thus our proof-of concept experiment becomes interesting and potentially important technologically.   In addition to being used for solid state lighting and full color displays, such technology can also be used as light sources for fluorescence bio and chemical detection.”