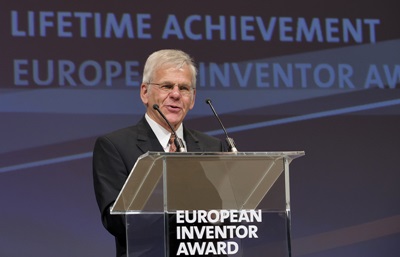 Photonics technology has featured heavily among the winners of this year’s European Inventor Awards, highlighting once again its cross-cutting and enabling nature.

The event, organized by the European Patent Office (EPO) and taking place in Amsterdam this year, saw guest of honor Princess Beatrix of the Netherlands hand over a lifetime achievement award to Martin Schadt – who discovered that displays could be made from liquid crystals back in 1970.

At the time, Schadt was working for the Swiss pharmaceutical company Hoffmann-La Roche, but the technology has since gone on to revolutionize the displays industry and create a market now worth some $100 billion annually – enabling the invention of pocket calculators, mobile handsets and tablet computers in the process.

According to the EPO, Schadt’s big breakthrough came when he began testing an idea developed by colleague Wolfgang Helfrich, who suspected that if the long helical axis of a corkscrew-shaped liquid-crystal molecule could be “unwound”, it would create an optical effect.

“Helfrich had the idea and I designed and implemented the experiments,” said Schadt. “Within a short time we developed new liquid crystals which were able to realise this polarization effect.”

Eventually, Schadt discovered that it wasn’t necessary for the electric field to fully unwind the liquid crystal helix - just a few volts were enough to block the transmission of light. Thus LCDs could be operated with ordinary batteries, ushering in their use in the digital watches and calculators of the 1970s.

Schadt follows in the footsteps of Josef Bille, who won the same award last year for his work on the development of high-precision laser eye surgery.

EPO video: Martin Schadt on the early days of LCDs

Lighting up DNA
In the category of small and medium-sized enterprises (SMEs), liquid lens inventor Bruno Berge was beaten to the award by Pål Nyrén, whose “pyrosequencing” method for reading the sequence of bases in DNA works by detecting chemiluminescence with sensitive cameras.

According to the EPO, the Swedish scientist first came up with the basic idea in 1986, but it wasn’t until 1999 – when Nyrén set up company Pyrosequencing AB with two colleagues – and the award of a key patent in 2001 that the method became established.

Able to sequence DNA much more quickly than previous approaches, the method became widely adopted and the start-up company was eventually acquired by Qiagen for $53 million in 2008. The technology has also been licensed to a subsidiary of pharmaceuticals giant Roche. 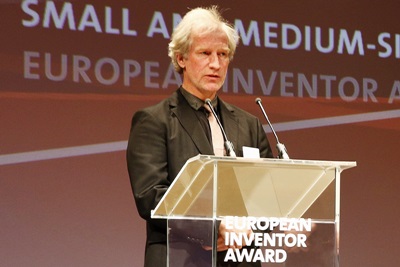 It involves taking a single strand of DNA and synthesizing its complementary strand, one base pair at a time, with a DNA-synthesizing enzyme and a substrate containing a chemiluminescent enzyme.

Solutions of the four nucleotide bases that make up DNA - adenine, guanine, cytosine and thymine - are then added sequentially. A successful combination of a base pair produces a light signal via the chemiluminescent enzyme that can be detected by a camera and mapped. The process is repeated for each of the four different nucleotide solutions, with the mapped bases then combined to generate the entire DNA sequence.

Partly as a result of Nyrén’s invention, the cost of DNA sequencing has fallen dramatically over the past decade, to the point where it is now an affordable option for many in the developed world to pay for tests to show their genetic susceptibility to disease – as highlighted recently by Angelina Jolie opting for a double mastectomy after discovering that she had inherited the “BRCA1” mutation putting her at increased risk of breast and ovarian cancer.

Remarkably, the cost of sequencing an entire human genome has shrunk from an estimated $95 million in 2001, to just a few thousand dollars today – and while that is still expensive for many, it does herald the era of “personalized” medicine, where treatments promise to be tailored to a person’s specific needs and genetic make-up.

Among the other losing finalists with a photonics technology this year were a research team from Belgium and Germany working on selective-emitter solar cells, as well as the inventors of electronic ink for displays, Joseph M. Jacobson and Barrett Comiskey from the Massachusetts Institute of Technology (MIT).