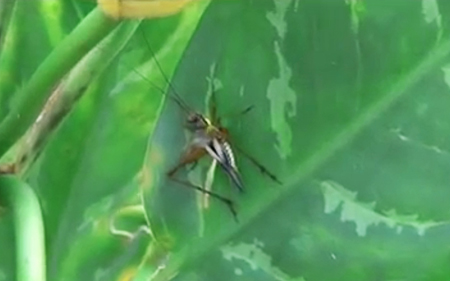 A team investigating the mechanisms of sound generation in Lebinthini crickets discovered that the high-frequency singing (above 15 kHz) is a result of special adaptations in both wing resonances and stridulation (the rubbing together of a pair of specialized wings).

The sound emitted by crickets is produced by the stridulatory organ, a large vein running along the bottom of one wing, covered with “teeth”, which is rubbed against a plectrum on the other wing. The cricket opens and closes the wings but stridulation only occurs during the closing phase. To produce a pure tone call (a musical song) the teeth of the file should be systematically organised. As this happens the cricket also holds its wings up and open, so the wing membranes can act as acoustical sails.

Dr Fernando Montealegre-Zapata, from the School of Life Sciences at the University of Lincoln, UK, said: “This research shows how a small group of crickets (the Lebinthini) have evolved to exploit high frequencies distinctly above that usually reported for crickets. Modern crickets ancestors appeared some 200 million years ago, and since then seem to have used low frequency calls. Therefore most modern cricket species evolved to communicate at low frequencies (2-8 kHz); the human ear can detect between 20 and 20,000 kHz.

"The Lebinthini are a more recent group (30-40 million years ago) and they exploit frequencies above the normal range of cricket singing (>10 kHz). What makes these crickets different is that they evolved stridulatory files with a high density of teeth. The stridulatory file is the first step of multiplication for sound production, and is therefore the first structure of the singing apparatus modified during evolution to reach high frequencies. Low frequency crickets usually exhibit files with a lower density of teeth." 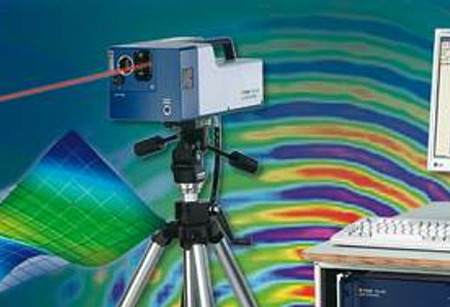 The detector is based on a microscanning laser doppler vibrometer from Polytec.

The research team, which also involved academics from Museum National d'Histoire Naturelle, Paris, and the University of Bristol, measured the fine-scale movements of the forewings during stridulation and the mechanical properties of the wings using high-speed videos and sensitive diodes and laser vibrometry.

They discovered the detailed arrangement of wing resonances is responsible for the harmonic-rich composition of the calling song. This confirmed the Lebinthini evolved by exploiting high frequency resonances already existing in the wings, but not used by their ancestors.

Montealegre-Zapata told optics.org, “The machine is an ultra sensitive photodiode that optically detects the movement of the wing and converts it into an electrical voltage. The laser is a PSV 400 microscanning Laser Doppler vibrometer from Polytec.

“It cannot be used in the field because it’s a huge machine. But in the lab, with the insect paralyzed, its wing extended to enable us to monitor the resonance output. For the optical diode to work the insect needs to be actively singing on a single spot.”

A paper detailing how this group of crickets broadcast high-frequency songs has been published in the Journal of Experimental Biology.

He added: “Evolution may favour the exploitation of high-frequency modes of vibration already existing in the natural wing of these crickets, and perhaps in their ancestors. Whatever the role the harmonics play in field crickets, if any, they have gained the function of dominant frequency in the Lebinthini.”

“As such, harmonics acquired enhanced radiating power, and a new role, distinct from the ancestral one, in the course of the evolution of acoustic communication in Lebinthini. These results provide an explanation of how such evolutionary pattern could be achieved mechanically.”

“Studies on mechanisms of sound production continuously contribute to a better understanding of animal communication, its role in life history and its evolutionary pathways. In this case the wing structure and mechanical properties that often allow powered flight together constitute morphological constraints that may limit, yet also organise the potential evolution of cricket acoustic communication.”

Here are two videos of the Lebinthini cricket first in its natural habitat (singing) and second in the experiment (silent, showing the wing movements):