Still dependent on high-tech imports, China is learning on customer experience, but home-grown laser sales and exports are on the up.

By Matthew Peach in Munich 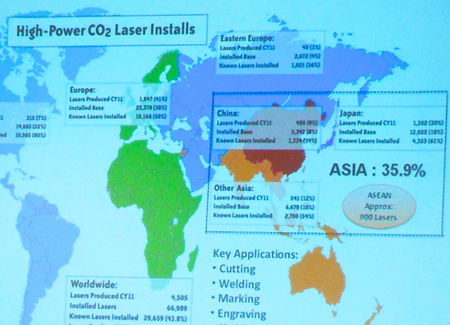 The 11th International Laser Marketplace presentation organized by Optech Consulting this year had a distinctly Asian flavour with no fewer than four reviews and forecasts dedicated to the significant markets of China, Japan, ASEAN (Association of South East Asian Nations) and Singapore.

Dr Qitao Lue, Chief Technology Officer at Han’s Laser, opened proceedings with his generally positive assessment of the Chinese laser market which carried the ingenious title of “Presence and Future”, hinting that if a foreign laser company wants to succeed it really needs to have a base in the country.

By his reckoning, sales of laser processing equipment in the country have grown steadily since 2006 ($399m) to reach an estimated value of $2200m this year. There were two phases of the sales: relatively slow progress to 2009 ($740m) then a surge during the past four years.

Over the past three years, imports of laser systems averaged around $800m, tailing off somewhat last year, suggesting that the country is beginning to supply itself, although it was not obvious whether Lue was joking when he commented, “The Chinese laser market is still under foreign control.” 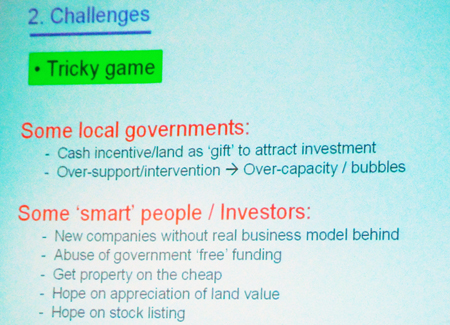 Candid: Lue described the reality of doing business in China.

After talking extensively about the types of end user market and geography of the client companies, Lue moved on to the interesting topic of the pros and cons of doing business in China. Considering challenges, he said, “the relationships between buyers and sellers are not as strong as in western countries. And many customers have a short-term investment view of just a few years.”

The slides labeled Challenges covered such issues as lack of core technologies, low margins due to strong competition and, in Lue’s own words, “Price, Price, Price! Price is a massive issue. For example, low power marking lasers have seen a 50% price drop since 2010, while higher power cutting lasers have also fallen in price by up to 25%.”

In a special slide entitled “Challenges – tricky game”, not included in the delegate pack, Lue was more candid about the reality of doing business there. Some local governments will offer cash incentives or land in return for technology companies investing in certain areas. But over-support or intervention by these bodies can lead to over-capacity bubbles, he suggested.

And on the corporate, side there are unscrupulous new companies unsupported by realistic business models, there is abuse of government funding, some people want to get property “on the cheap” because land values are rocketing and there is also much stoking of stock prices. But one would not need to be too cynical to say these practices are not the exclusive preserve of emerging Chinese companies.

Getting back to the program, Lue considered what will happen to China’s laser business in the coming years. “There will be rapid development, high quality laser technology is reaching beyond the large industrial sectors into SMEs and job shops and garages. There is strong growth in automotive, consumer electronics. Chinese laser manufacturers are catching up and improving customer service and the local supply chain.”

But in wrapping up, Lue repeated his earlier remark about gross margins being squeezed; marking and cutting systems by 20 to 40% and welding and micro-processing systems by 20 to 50%. He concluded, “The right business models and philosophies are needed to grow sales in what will soon be the second largest economic market in the world. Good luck!”